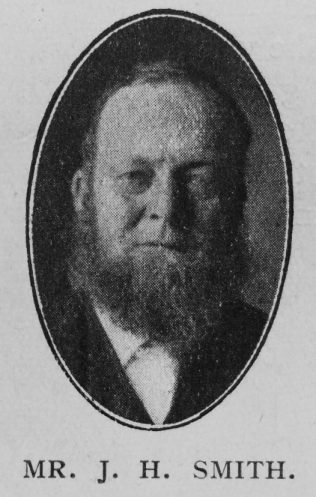 Transcription of obituary published in the Primitive Methodist Magazine by G.A.

Our Church at Tadcaster suffers great loss by the sudden death on June 24th of Mr. J.H. Smith, one of our oldest, most able, and highly appreciated local preachers and officials. For over forty years our brother was a very loyal and generous member of our Church, and a very arduous and successful worker. Soon after his conversion he became a local preacher, in which capacity he laboured for thirty-nine years, He was also a most reliable class leader, trustee, Sunday School teacher, and assistant Sunday. School superintendent.

His piety was very graciously felt, and produced a favourable impression upon the minds of employers and workmates alike. He feared God above many, and held daily communion with Him. He laid the whole of his valuable gifts upon the altar of service. His funeral was conducted by his own minister and Rev. J.P. Osborne.

John was born in 1849 at Tolstone, Yorkshire, to parents William Smith, who worked the land (1851), and Sarah Walker. He was baptised on 3 June 1849 at Newton Kyle, Yorkshire.

He married Mary Jane Backhouse (1854-1932) in the spring of 1875 at Tadcaster, Yorkshire. Census returns identify two of three children.