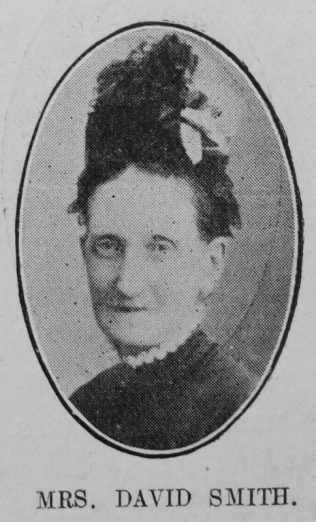 Transcription of Obituary published in the Primitive Methodist Magazine by W. Dickenson

Sarah Smith, relict of the late David Smith, of Halifax, after a brief illness passed to the higher service of heaven, November 20th, 1908. Born at Morland, July 16th, 1829, she was married to Mr. David Smith in 1853. Their home was always an open house not only for the ministers of the Circuit but of the Connexion. In whatever place they lived they speedily took front rank among the tireless workers of the Sunday School and church.

Mrs. Smith had much to do with the energetic efforts which resulted in the present imposing church premises at Sowerby Bridge, and from the time they removed to Halifax they were to the fore, whilst physically fit, in all that made for the prosperity of “good old Ebenezer.” The class meetings, love-feasts, and every means for the culture of the spiritual life were our sister’s delight. No preacher ever had a better or more eager hearer, or a more prayerful or sympathetic worshipper. What Mrs. Smith sacrificed in time, money, and labour for the welfare of the Church will never be known. Her record of Christian life and church service is a most inspiring one, revealing whole-hearted consecration to God and unstinted devotion of self and belongings to the service of her Redeemer. She was a “mother in Israel,” one of the best and noblest women in the Christian Church of to-day, and certainly one of the most loyal Primitive Methodists it has been our privilege to know.

It was an unspeakable delight to see the tender regard, affection and reverence in which our sister was held by her children and grandchildren. The esteem felt for her by a large circle was shown by the numbers who attended her funeral on November 24th. After a short service in the home, a public service was held in Ebenezer Chapel, in which Revs. W. Dickenson and J. Holroyd, Mr. D. Halstead and Mr. T. Jackson took part.

Sarah was born in 1828 at Morland, Midgley, Yorkshire, to parents James, a weaver, and Hannah.

Sarah was a factory operative before her marriage (1851).