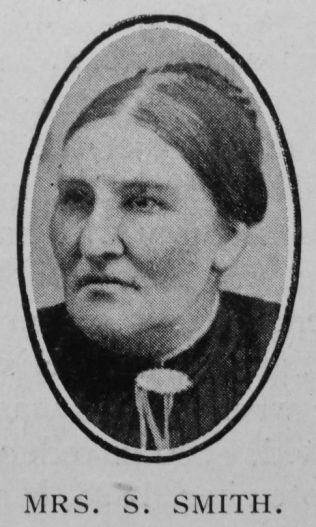 Transcription of obituary published in the Primitive Methodist Magazine by E.A.

Our Church in Brampton has suffered a great loss in the death of Mrs. Smith. Connected with this society for over fifty years, during which she unceasingly and ungrudgingly gave to it her best—in money as well as in personal service—her translation has impoverished it, and Primitive Methodism has reason to mourn her removal.

Every Connexional cause found her a willing helper, whose heart and purse responded to their frequent appeals. For many years her Home Missionary box has helped to swell the total, and many of God’s poor have lost a good friend. Her religion surrounded her with a heavenly atmosphere, which none could enter without being the better for it. She now rests from her labours, but her works follow her.

She married Thomas Smith (1838-1876), a grocer, in the summer of 1862 at Brampton, Cumberland. Census returns identify two children.