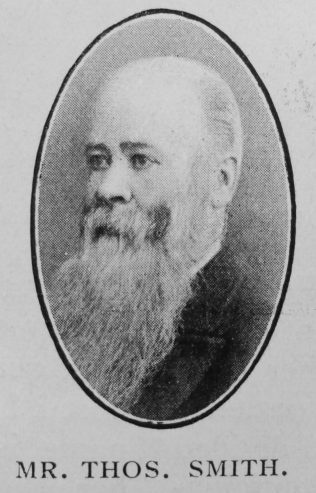 In the passing of Mr. Smith to the “Homeland,” the Ramsgate Station has experienced a loss which is keenly felt, especially by his contemporaries, who like him have been staunch and true through years of stress and strain in church work.

Mr. Smith hailed from Wisbech, Cambs. There he was won for Christ by our Church, and his talents for service called into requisition. Whilst in his early manhood he removed with his esteemed wife, a daughter of the Rev. W.G. Belham, of pioneer fame, to Ramsgate. A true son of the Connexion, his attachment bore the strain of removal and he allied himself at once with his own people.

Devotion to the Church and generosity were striking characteristics of his religious life. He filled for many years the office of Circuit Steward. He was given to hospitality, as scores of ministers can cheerfully testify. In business he was the soul of integrity and uprightness. The home circle was bright and happy with a sunny piety, and his children knew their father loved his God. His later years were marked by physical infirmity, accentuated by the sudden illness of his loved wife, and it was apparent the pins of the earthly house of his tabernacle were loosening, and so it proved, for almost suddenly, May 20th, at the age of seventy-two years he was clothed upon with the house which is from heaven.

Thomas was born in 1838 at Wisbech, Cambridgeshire, to parents Thomas Smith, a tailor, and Hannah Shepherd. He was baptised on 25 June 1838 at St Peter, Wisbech.