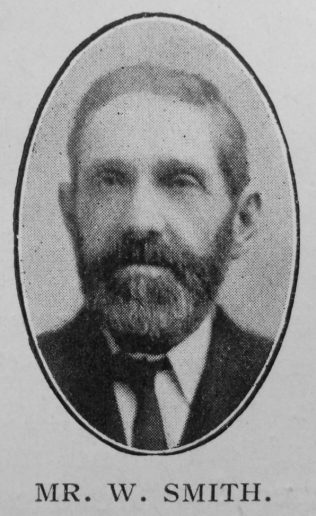 Transcription of obituary published in the Primitive Methodist Magazine by W. Hayton

The Brigg Circuit has suffered great loss through the death of Mr. W. Smith, of Calney, who was a man of high repute and sterling worth. The end of his earthly life came with alarming suddenness on June 22nd, 1911, to the great sorrow of his wife, family, and a large circle of friends. Mr. Smith was sixty-nine years of age, and had been a member fifty years and a Local Preacher forty-five.

For many years he was on a farm at Foaltham in the Tetney Circuit, and a few years ago removed to another farm at Cadney, where he took a prominent part in the erection of a new and beautiful church in that village.

As a temperance reformer he was an enthusiast. Both by precept and example he did his utmost to establish and promote the principles of temperance which he believed were for the benefit of the individual, the family, the Church and the nation. His ministries as a local preacher were always welcomed and tended to the edification of his hearers. Devoted to his work appointments were not neglected, full preparation was made for the pulpit, and the best he had was given, to the enjoyment and profit of his audience, and many have precious memories of the instruction, the comfort and help he gave them.

It has been the privilege of the writer to know him over twenty years and he bears testimony that a more honest, upright and trusted friend could not be found. He would have his failures, but his excellencies far outweighed them. The funeral was the largest that had been seen in the locality, and was an evidence of the great respect in which he was held. Testimonies of high appreciation are given by Revs. J. Shaw, T. Storr, W. Mainprize, and others.

William was born abt1841 at Bigby, Lincolnshire, to parents William, who worked the land, and Ann.

He married Mary Driffill (1850-1932) in the summer of 1870 in the Caister Registration District, Lincolnshire. Census returns and birth records identify nine children.