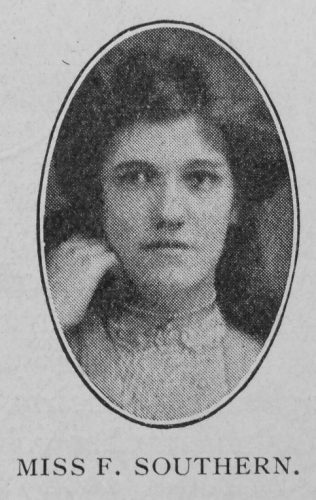 Florrie Southern, daughter of Jonathan and Mrs. Southern of Lemington-on-Tyne, entered into rest after an illness of three years’ duration, aged twenty-one years. Previous to her affliction she was a member of the choir and an active member of the C.E. Society.

An earnest worker on the Flowers and Visitation Committee, week by week she would take gifts of flowers to the aged and sick of the village. At the monthly consecration service she gave testimony for her Master.

She gave promise of a useful and devoted life, when a sudden and unexpected illness laid her low. Her days of service were brief, but they were bright and cheerful. The funeral service was conducted by Rev. E. Campbell.

Florrie was born in 1891 at Crook, Co. Durham, to parents Jonathan Southern, a coal miner, and Elizabeth Winskill. She was baptised on 2 April 1891 in the PM Chapel, Crook

Florrie died in the spring of 1912 at Lemington-on-Tyne, Northumberland.