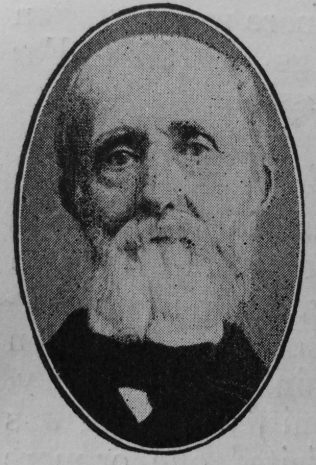 By the death of Brother Charles Burch Spooner, of Hadleigh, in the Ipswich Circuit, our church has lost an honoured and devoted member. Born at Hadleigh, December 27th, 1813, he died at ninety-four years of age, being the oldest member on the Circuit and the oldest resident in the town. He began to preach at twenty-five years of age and continued till he was over eighty, his services being in great request. He was intimately acquainted with the early preachers of East Anglia, especially the Rev. Robert Key, who very much desired him to become a candidate for our ministry. He could tell many interesting stories of his experiences in those early days as he walked thousands of miles to preach the Gospel.

He was a great reader and diligent student, his sermons being carefully prepared and delivered with intense fervour. He wrote the whole of the Old Testament in verse, also the Roman History and the Boer War. He also wrote a good deal of original music and was a good violinist.

His two sons both became ministers, one having a church in America, the other being Rev. Charles Spooner, an honoured minister in our London District.

Brother Spooner died as he had lived, trusting in the Saviour. The interment took place in the Cemetery, Hadleigh, on Saturday, February 8th, conducted by the Superintendent Minister, Rev. H. Bennett.

An “In Memoriam” service was held the following Sunday, conducted by the writer, when a large congregation testified to the high esteem in which our brother was held. Mr. W. Allen presided at the organ, and a quartette party from the Congregational Church sweetly sang, “Blessed are the dead,” the organist playing with marked effect, “O rest in the Lord,” and “The Dead March in Saul.” We commend the sorrowing ones to the Divine Comforter.

Charles was born on 27 December 1813 at Hadleigh, Suffolk, to parents Theophilus Hicks Spooner, a shoemaker, and Mary Burch.