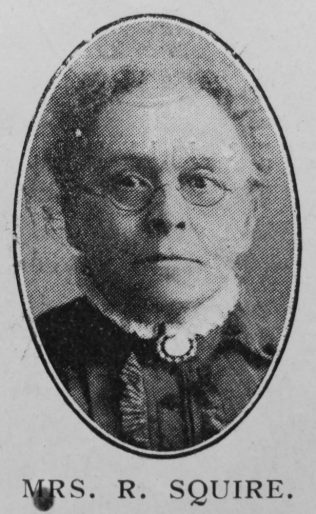 Transcription of obituary published in the Primitive Methodist Magazine by F.H. Clark

On March 19th, 1912, there passed to her reward Mrs. R. Squire, one of the most devoted members of our Streatham Church. Born in Battle, Sussex, sixty-seven years ago, not until the age of twenty did she consciously become Christ’s. From that time onward she led a consistent Christian life, and had the joy of leading many to her Lord.

Our friend was connected with the Wesleyan Church at Battle, but, removing to London and subsequently to Manchester, joined our Church in both places. In 1880 she was married to Mr. Squire at Caledonian Road, and for many years assisted in Sunday School and Band of Hope. Then, removing to Kennington and afterwards to Streatham, she rendered invaluable service. Her last public act was an endeavour to win a soul for Christ.

Her home life was singularly beautiful and happy. As wife and mother and friend she was just what a woman should be. Her body was laid in Highgate Cemetery on March 23rd. Rev. G. Trusler officiated, and the next day conducted a memorial service in our Streatham Church. We commit the husband and son and daughter to the loving care of God.