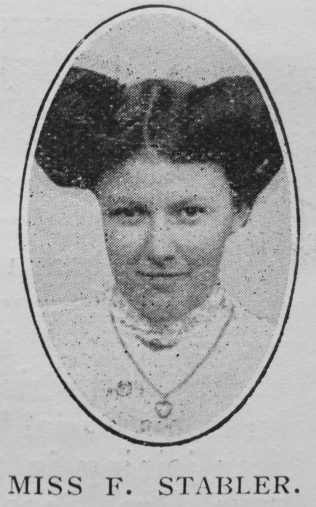 Transcription of obituary published in the Primitive Methodist Magazine by J.P.

Moorsley Society, Hetton Circuit, suffered a severe shock by the sudden death of Miss Florrie Stabler, on Sunday, May 22nd, 1910. She was only 18 years of age, but her exceptional devotion and service had already won the admiration of the village. She was an excellent type of a pure, modest, religious girl; full of promise for the future; always at her post in the Sunday School, C.E., and Choir, and had worked very hard for the anniversary.

She returned from business on the Saturday evening, apparently in the best of health. During the night she was taken seriously ill, and died on the Sunday morning. Her tragic death has been a terrible blow to the home, and a real loss to the Church.