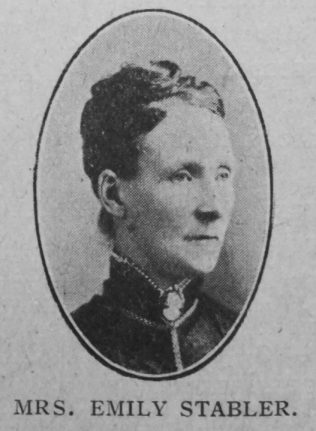 No man ever had a more devoted and faithful wife than had the Rev. A. Stabler. She was indeed a gift of God to him,

Her maiden name was Emily Fenn; she was born at Great Ryburgh, in the Fakenham Circuit, Norfolk, on October 24th, 1841. Her people were Primitive Methodists. Married in 1874, she started housekeeping on her husband’s salary of £18 a quarter. Three children were born into the home—one daughter, who died in infancy, and two sons, now residing in Leicester. Her married life was chiefly spent on rural circuits, and her husband was often away from home fulfilling his ministerial service.

During the last thirteen years of her life she was associated with Leicester III. Circuit. Stricken with paralysis on November 1st, she passed away nine days later, to the great sorrow of her husband and family.

The funeral service was conducted by the Rev. Arthur Jubb in our Curzon Street Church on November 15th, and the interment took place at Welford Road Cemetery, many friends assembling to pay their tribute of respect to her whom they had greatly esteemed.

She married Alfred Stabler (1846-1920), a PM minister, in the summer of 1874 in the Aylsham Registration District, Norfolk. Census returns and birth records identify three children.