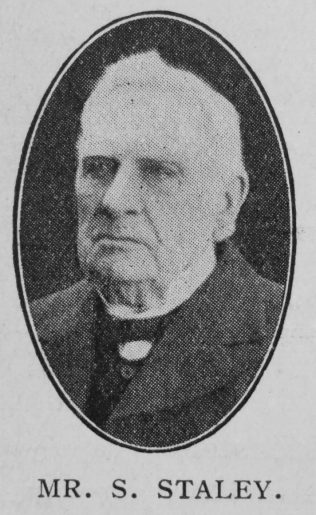 The divine summons came to our brother on March 22nd, 1912, at Brailes, in the Banbury Circuit, and both society and circuit realise that one of God’s very own has gone from them. He found the blessing of assurance in the old chapel in Broad Street, Banbury, and at once commenced his fifty years’ glorious ministry as a layman of our Church. For forty years he resided at Brailes, and was recognised by the whole village as a leader of giant character against all evil.

Brother Staley first served his church as a class leader, and also for about thirty years as a local preacher faithfully proclaimed full and free salvation in Jesus Christ. Our brother was an acting trustee for five of our chapels; also for Mount Sorrel Chapel, Leicester, which church he helped to build.

After eighty-three strenuous years the “crossing of the bar” was peaceful and triumphant. The funeral took place on March 27th, 1912. A memorial service was conducted on May 12th by Mr. J. Bryce.

Stephen was born abt1827 at Eye, Herefordshire, to parents James and Ann. He was baptised on 14 January 1828 at Eye.