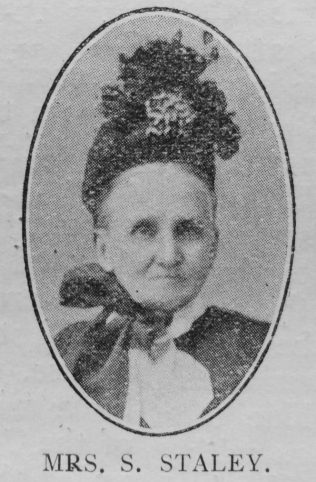 Transcription of obituary published in the Primitive Methodist Magazine by M. Cuthbert

Mrs. Susannah Staley died October 29th, 1909. By her death Forest and Middleton-in-Teesdale Circuit have lost a generous and faithful friend. Her sympathies were large and her active labours were abundant. For over fifty years she was a most cheerful supporter and strenuous worker. For many years she was an earnest Missionary collector, and by much self-sacrificing toil succeeded in gathering large sums for our Mission fund. Her home especially, during her husband’s life, was the home of the preachers. All were. heartily welcome.

She enjoyed the ministry of the Word, and was regular in her attendance at the various means of grace. She took part in the prayer meetings and meeting’s for public testimony. This fitted her for her work as class leader and useful spiritual guide to others. Largely through her own personal influence her two sons and four daughters are highly respected members of our Church.

Her end came very suddenly. She often expressed a desire, if it was the will of God, that she might die in the midst of her friends and in harness. She ceased at once to work and live. A large number of relatives and friends gathered to pay the last tribute of respect to her memory.

“Blessed are the dead which die in the Lord.”

Susannah died on 29 October 1909 at Forest in Teesdale, Co. Durham.