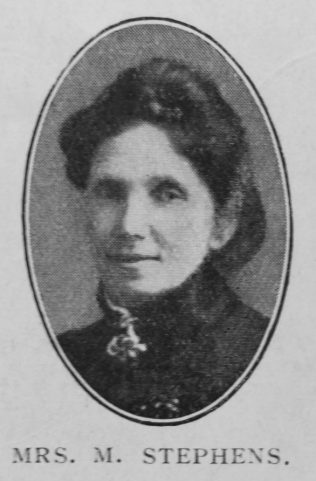 On January 9th, 1915, Mrs. Martha Stephens (widow of the late Rev. Edward Stephens, Primitive Methodist minister) entered the Homeland after a long and painful illness, borne with Christian patience and fortitude. For several years she resided at Gillingham, in the Motcombe Circuit, where she was a member until she peacefully entered into rest.

The Rev. T. Collins, of Salisbury, represented the Salisbury and Southampton District Committee at the funeral, which took place in the New Cemetery, Gillingham, Dorset. To the two sons and two daughters who mourn their loss we extend our sincere sympathy.

Martha was born in the summer of 1845 at Draycott, Somerset, to parents William, a dairyman (1851), and Catherine.  His brother George was also a PM minister.

Martha died on 9 January 1915 in the Shaftesbury Registration District, Dorset.