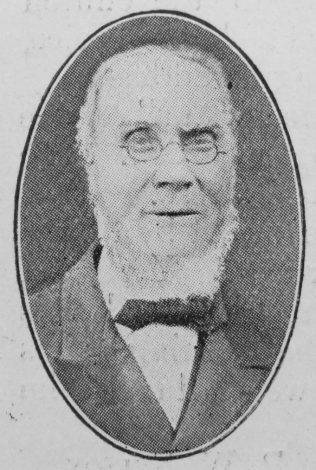 Bro. John Stillman was born at Southwick, Wilts, August 21st, 1831, and in 1844 removed to Frome, where he lived and worked the greater part of his life. When about eleven years of age, he received a distinct call from God. He said, “A light appeared before me which I can never forget and which filled me with unspeakable love.” His conversion was followed by immediate and whole-hearted service for Him whom he had seen in the way. When quite young he started a tract society which ramified through the villages of the circuit.

In 1847 he was placed on the plan as a local preacher.

He speaks of being up and away at 6.15 in the morning singing through the villages before the morning services. The work of the Lord in the Primitive Methodist Church was a real luxury to him. He had a fine experience and could say with no uncertain emphasis, “I know whom I have believed.” He had many and sore trials, but proved the sufficiency of the grace of God. His love to his Master increased with the multiplying years. Christ was most to him when needed most.

He revelled in the old hymns and the Methodist class meeting, but welcomed the Christian Endeavour Society, and scarcely ever missed its weekly meeting. He rejoiced, in the near presence of God. His Bible was his daily companion and guide, and communing with God his daily delight. He removed to Kilburn about twelve years since, became much attached to our church and our church to him.

On Sunday morning, April 26th, 1908, he was taken suddenly ill, and in brief time “he was not, for God took him.” The funeral service was conducted in Kilburn Lane Church by the Revs. G. Shapcott, J. Sheale, and J. Pickles, and the memorial service by Revs. G. Shapcott, and several of our local preachers.

Mrs. Stillman, his life-long companion, still survives him and is awaiting her translation to rejoin her beloved. Upon her and all the family we solicit the Father’s blessing.

John was born on 21 August 1831 at Southwick, Wiltshire, to parents John Stillman, a waiver (1841), and Hannah Elizabeth Smith. He was baptised on 30 June 1837 at Frome Independent Chapel along with two siblings.