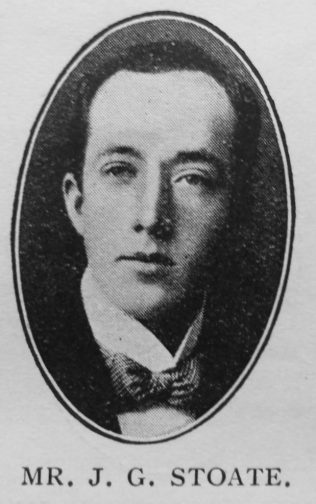 Transcription of obituary published in the Primitive Methodist Magazine by J.C. Kilvington

Mr. J. G. Stoate, who passed to the better land early on the morning of February 25th, 1910, was the son of a Crimean veteran, who still lives to mourn his untimely loss. Our dear brother, who was only 35 years of age, succumbed to an operation for appendicitis, blood-poisoning supervening despite the vigilance of two medical men in attendance.

He was associated with our Cecil Street Church and School, and was converted to God in 1893, during a mission conducted by the sons of Richard Weaver.

From his conversion he sought to make himself useful, and to improve the talents God had given him. Joining the Sunday School he was first appointed as librarian, subsequently he took joint charge of a large infant class where he was much beloved by the children, and just prior to his death, after a term of service as one of the Secretaries, he accepted the important position of Assistant Superintendent, where it was hoped many years of useful service lay before him.

Our brother took a keen interest in everything that appertained to the welfare of the church. His warmheartedness, friendly disposition and cheerfulness of spirit won for him a large circle of friends who sorrowed deeply when they realised that he had gone.

His interment at Carlisle Cemetery was witnessed by a large number of people, the service in the chapel and at the graveside being conducted by the Rev. W. Watson, of Carlisle, and Rev. J.G. Cushing, of Maryport, who referred in feeling terms to the departure of our dear friend. Amid the tears of young and old we committed him to the grave in the sure and certain hope of a glorious resurrection.

A memorial service was held in Cecil Street Church, Carlisle, the Sunday week following, when the Rev. W. Watson preached to a crowded congregation from the text, “He giveth his beloved sleep.”

Joseph was born in the spring of 1874 at Carlisle, Cumberland, to parents George, a railway passenger guard (1901), and Isabella.

Joseph worked as a railway clerk.