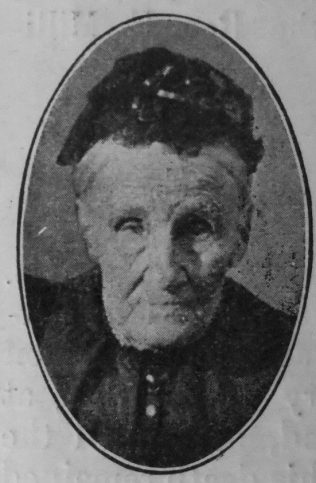 Transcription of obituary published in the Primitive Methodist Magazine by Jno. Guy

There departed this life on February 28th, 1908, the oldest member in the Canterbury and Whitstable Station. Mrs. Stockbridge, formerly Mrs. Tapley —nee Miss Wilson—was born at Petham, December 29th, 1815, and so was in her ninety-fourth year. With her first husband she took part in the founding of Petham Society and the erection of the first and later chapel there. For many years in conjunction with her first husband, she fulfilled the exacting and exhausting duties of a local preacher. As far back as 1852 on to July, 1855, she, with others, frequently walked into Ashford, some twelve or more miles, on a Sunday morning, to take part in an open-air campaign under the leadership of the late Rev. John Guy, Senr. The toil would continue the whole day, with little obtained to nourish the physical, and at the end the toilsome journey home.

Her energies and gifts were fully consecrated to God, and spiritual results ensued, the true registration of which is in heaven. As far back as 1844 our sister became inspired to collect funds for the missionary cause. In that year she received the only box she ever had, and by, and in, it for sixty-three years varied sums were obtained each year for this special phase of Christian work, Only during the last year of her life did her efforts slacken for this cause so dear to her.

She resided in one cottage from 1843 to 1907. In June, 1906, she became bedridden through a fall. But nursed by her granddaughter, Miss Neame, she spent her time comfortably, patiently waiting the call of her Lord to life eternal. The writer often visited her, and was much interested in the reminiscences she could furnish.

In consequence of the unforeseen and unpreventable, she spent the last six months of her life in Bridge Infirmary.

When able she would occasionally read to others who were her companions in weakness and multiplied years.

Having looked and calmly waited the happy issue out of this life, it came to her February 28th.

On Wednesday, March 4th, her mortal remains were laid to rest in Petham Churchyard amid her kindred and many friends.