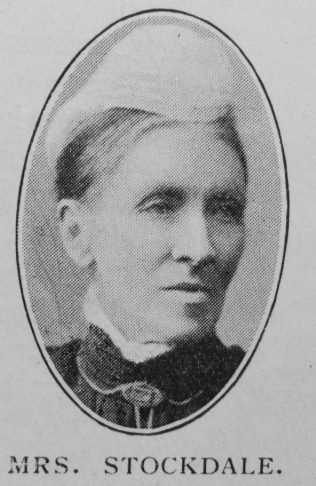 Transcription of obituary published in the Primitive Methodist Magazine by G. Wood

Mrs. E. A. Stockdale, widow of the late Rev. Christopher Stockdale, was born at Bolton by Bowland, in Yorkshire, October 1st, 1840.

Her parents were members of the Church of England. Whilst in her teens the Wesleyans missioned her native village, and when the dark nights came on the services were held in two of her father’s cottages. Mrs. Stockdale, who attended these services, was among the first converts. She became and continued a Sunday School teacher until the time of her marriage with the Rev. Christopher Stockdale, in 1867.

Our sister was a true helpmeet to her husband both in the house and in his circuit work.

During her husband’s superintendency in Swindon, his health broke down; and here, perhaps, Mrs. Stockdale’s influence was most felt. She laboured to the very limit of her ability to supply her husband’s place, and to keep the work going. She was the leader of the largest class in the Circuit, and though often feeling unequal to the task, she faithfully attended to her duties, and to-day her name is a household word among the people.

Her children were all brought up in the fear of God. Her only son graduated at Oxford, and is to-day a clergyman in the Anglican Church. Her youngest daughter is the wife of the Rev. J.M. Johnson, one of our ministers, and her other three daughters are earnest and faithful workers in the South Front Church, Southampton.

Her last illness was a very painful one, but she was peacefully resigned to the will of God. Our sister fell asleep in Jesus on August 15th, 1910, surrounded by her sorrowful children. The funeral service in the South Front Church, and the interment in Southampton cemetery were conducted by Revs. G. Wood and J. Squires.