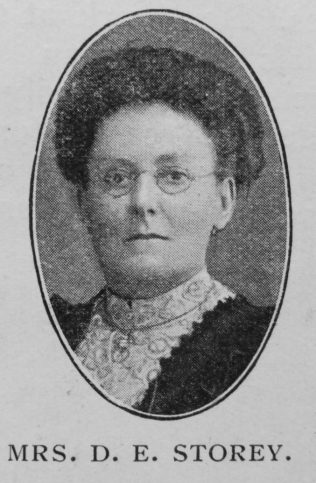 Transcription of obituary published in the Primitive Methodist Magazine by J.S. Nightingale

One of the most devoted women in the Central Church, Chester-le-Street, passed to her rest on Friday, January 27th, in the person of Mrs. Dorothy E. Storey, the beloved wife of our Junior Circuit Steward, Councillor Thomas Storey.

From her earliest years she had been closely connected with the Church, to be engaged in its service was not only her joy, but the very life of her life. “Always Ready,” seemed to be her motto whenever she was needed, and in a multitude of ways she lived the life of helpfulness. For many years she occupied an honourable and prominent position in the Order of Good Templars. Representing the Order in some of their highest Courts. How highly she was esteemed by them was seen in the presence of 500 of her fellow Good Templars when her interment took place.

In the midst of her good work, she had been afflicted nearly all her life, but with courageous devotion went on her way, making the lives of her fellows brighter and better. A friend of the children, she was called by them familiarly yet respectfully, “Aunty,” and some of the little folk in her last days prayed in their simplicity and beauty, that God would soon make “Aunty” better.

About nine months before her decease it was noticed that she was failing. All that medical skill, the devotion of her husband, and the gracious Ministry of friends could do, was done, but in vain, and after a critical operation, she quietly and peacefully passed home to God in her forty-eighth year.

A generous, sunny and loving spirit, she had lived to be greatly missed, but “to live in hearts we leave behind is not to die,” and she had done what she could. It is estimated that one thousand persons from all parts of the district gathered on Sunday, January 29th, to pay their tribute when the interment took place.