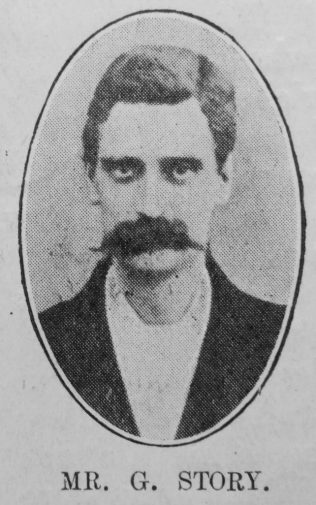 Transcription of Obituary published in the Primitive Methodist Magazine by W.F. Clulow

MR. GEORGE STORY.—The church at Chelmsford has suffered distinct loss by the death of Brother George Story. For years he was on the preachers’ plan, trustee and secretary of the Trust. He also took a great interest in the choir and acted as its secretary. One of the oldest members, his religious life was bound up with the Hall Street Church.

It was the greatest surprise to all that the first news that should reach us in the New Year should be that Brother Story had “slipped into glory.” He had been ill for some little time, but none regarded it as serious, not even himself. On the last day of the old year, as we knelt to pray we were impressed by his fervent and quickly-repeated responses. Surely he was, if unconsciously, feeling his way to God. The same night he slept, and awoke in God’s more immediate presence.

The writer conducted an “In Memoriam” service in the church of his love and many labours, when Councillor H. Clark gave an address. For his sorrowing widow and family much sympathy is felt. May the Divine blessing and guidance abundantly be theirs.

George was born in late 1864 at Rotherhithe, Surrey, to parents George, a scale maker, and Matilda.

Census return identify that George was a weigh-scale maker.