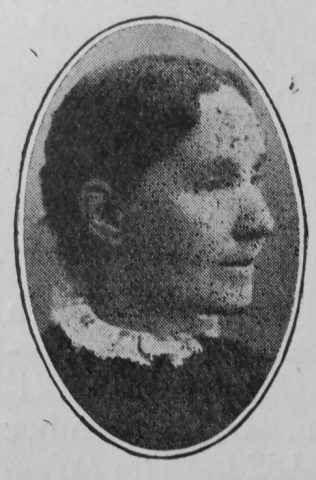 The removal of Phoebe Stubbs, of West Hartlepool, has caused a vacancy that is keenly felt. Her connection with our church was life-long. The daughter of the late Solomon Eades, of Middlesbrough, she is remembered for her exemplary Christian character by those who knew her in her maiden days. Becoming the wife of Mr. W. Stubbs, who remains to mourn her loss, her domestic duties, together with the anxieties of motherhood of a large family, only tended to develop the real Christian life. Spiritual things were very real to her, and were the dominant forces of her life. To those who have known her in her later years her memory is like a grateful fragrance.

The Rev. J.P. Langham says of her: “Her piety was radiant and impressive. All who came under her influence felt the power of her transparent goodness. She was true to principle at any cost. She accounted it a joy and honour to entertain the ministers of the Word of God.”

Nothing gave her greater joy than the prosperity of the circuit. She was a regular attendant at the means of grace, a class leader in our Whitby Street Church, and a real power in the Sunday night prayer meeting. When she prayed a deep sense of the divine presence pervaded the assembly, for all felt that she was talking with God. Always noted for her generosity, she was indeed a “sister of mercy” to many. Many homes will be darker and sadder for her translation, though we are glad to know that her daughters will do the best they can to lessen this.

Nor is it locally alone that our sister will be missed. Her sympathies were connexional and more. Our missionary cause, our South East London Mission, the British and Foreign Bible Society, and especially our Orphanage, had in her a true friend.

Through her influence with her brother, the late Mr. Solomon Eades, our orphanage was placed among the charities to be perpetually aided from the profits of the extensive musical instruments’ business carried on under the name of Eades throughout the North of England.

Our deeply lamented sister was stricken down in the midst of her usefulness, and was translated to the higher service on August 25th. Her remains were interred in the cemetery at Middlesbrough, but she was not there, she had ascended to the homeland.

Phoebe was born in 1851 at Tipton, Staffordshire, to parents Solomon Eades, an iron roller (1851), and Jemima Jeavons. She was baptised on 7 December 1851 at St Martin, Tipton.

She married William Stubbs (1854-1914), manager of a music business (1901), in the spring of 1874 at Middlesbrough, Yorkshire. Census returns identify eight children.