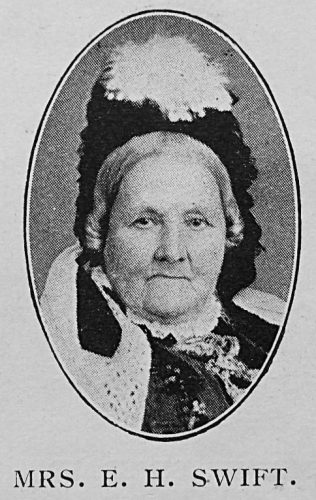 Mrs. Swift died in triumph on the 10th of June of this year. She entered the valley with an unquenchable hope. She had lived to a ripe age, as our human life is told. She attained the age of eight-four, and every year almost to the last was crowded with toil. From her early girlhood she had been a Primitive Methodist—over seventy years. First in Shropshire, but for the most part in Scotland.

She married at the early age of nineteen, and removed with her husband when she was twenty-four to Scotland. At Calder Bank she assisted in the opening of our cause and the erection of a church. Then she removed to Mossend, where she assisted in the erection of another church, and some time later removing to Motherwell, became associated with our church here, and served its interests In many ways. Her history covers the history of Primitive Methodism in the Motherwell Circuit.

Mrs. Swift was widowed in 1863, her husband, Joseph Swift, being killed in a boiler explosion at Mossend. She will be remembered not merely for her years of service, but for the strenuousness of her activities, the strength and steadfastness of her faith, and the buoyancy and vigour of her piety. She was blessed above many in her powers of physical endurance. She was notable for the massiveness of her mind and the robustness of her constitution. A patient, tender, thoughtful mother and devoted friend was she, and a precious memory of her fidelity remains.

She had a great treasure in her children—there were twelve of them—and the most of them remain, and her descendants number at least 200. A goodly number who bear her name are still associated with the church, and her husband’s name, Joseph, is borne by her grandson, the gifted and loyal secretary of the Sunday School.

Elizabeth was born in 1826 at Twyford, Shropshire, to parents Thomas, a labourer, and Sarah. She was baptised on 26 September 18926 at West Felton.

Note: Some records spell her maiden name as Haynes.