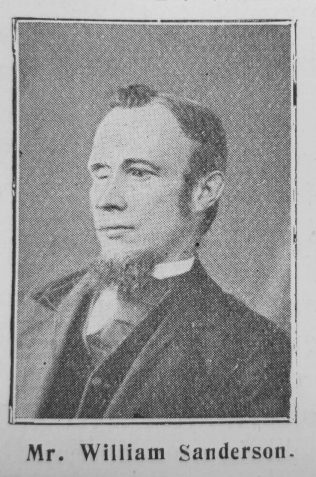 Transcription of Obituary In the Primitive Methodist Magazine by William S. Howlett

Was born at Elsecar, a village situated between Barnsley and Sheffield, on 17th April, 1834; and peacefully passed away to his everlasting rest, at Dukinfield, Stalybridge Circuit, on 25th March,1901, having nearly completed the 67th year of his age.

His father, Mr. Joseph Sanderson, was for 40 years a consistent member with the Wesleyans, and endeavoured to train up his children “in the way they should go.” But while he had the joy of seeing his daughters walking in the way of wisdom and righteousness, his sons seemed to turn a deaf ear to his counsels, resisted the influence of his earnest prayers, turned their backs on the Sunday School, and followed the paths of worldliness and sin.

When about 21 years of age, our now departed brother was united in marriage to Jemina, the youngest daughter of Mr. John Lawton, of West Melton, near Rotherham. But, although the union was one of conjugal affection and happiness, he continued for a time to associate with his old companions, and to revel in mirth and vanity. But one night, on the entreaty of his wife to leave his old companions and pursuits, he firmly resolved “to turn over a new leaf,” and as, just at that time, a Primitive Methodist new chapel was nearing completion, he engaged therein sittings both for himself and his wife. He attended all the opening services, and on the third Sunday, under the preaching of the late Rev. John Guest, of the Tunstall District, he was brought to a full decision for Christ, and as a penitent he sought and obtained pardoning mercy. He straightway joined the Society, becoming a member of a class led by Mr. A. Woodcock, and both he and his wife received their first-class tickets in May, 1857. A Sunday School being formed soon afterwards, Brother Sanderson became enrolled as a teacher, and soon became its superintendent, and had, in common with his fellow-teachers, the joy of seeing many of the scholars soundly converted to God; several of them becoming local preachers, one a minister in our own Connexion and another a minister with the Independent Methodists. For a considerable period he was also the leading singer, a position for which he was well fitted, and into which he threw all his energy and zeal. After a time he received a note to accompany his leader (who was also a local preacher) to his appointments, and passing through the several stages successfully, he was, in due course, raised to the position of fully accredited preacher on the plan. In this department of Christian service he greatly excelled, becoming not only acceptable, but with the people generally, highly popular – so much so that for many years his services were in almost constant demand. In most of the towns in Lancashire, and in many places in Cheshire, Derbyshire and Yorkshire, has his voice been heard proclaiming the Gospel of the grace of God; and not in vain, for, doubtless, many will be the crown of his rejoicing in the day of the Lord Jesus.

Having, while following his employment as a forge-roller, met with two serious accidents, resulting in the loss of one eye and a permanent injury to one leg, he, some 22 years ago, came to reside at Dukinfield, where he has carried on the business of a stationer and newsagent. Here he identified himself with our Foundry Street Society, and earnestly sought in every way to promote its spiritual and financial prosperity. He became a trustee for the new chapel, and was also a class leader and a local preacher.

His health had for some time been failing, and during the last eight weeks his sufferings were often very great and distressful, but were borne with the utmost fortitude and resignation. To his minister and others who visited him he gave pleasing testimony to the fact that the Gospel which he had for forty years preached to others was now his unfailing support and comfort. “The blood of the Cross refreshed him in death.” On March 30th his funeral was attended by a large number of relatives and friends; and amid many tokens of esteem for his character and worth and of regret at his departure, several of his fellow-workers laid his remains to rest in the Dukinfield Cemetery “until the day break and the shadows flee away.”

William’s parents were Joseph, a labourer, and Mary