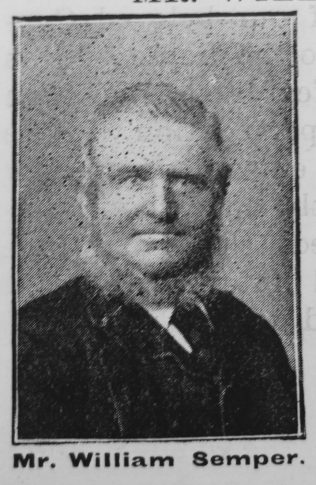 Transcription of Obituary in the Primitive Methodist Magazine by H.S. (probably Herbert Semper)

Lincolnshire Primitive Methodism is poorer through the passing away of one of her loyal and sturdy sons. On May 8th, 1902, William Semper, of Nocton, having kept the faith, finished his course, entered the Father’s House. Forty years ago he was brought to a saving knowledge of the truth, and from that time onward was most assiduous in his efforts to extend the Master’s kingdom. As local preacher for thirty-eight years, Sunday school superintendent for thirty-six years, and class leader for thirty-three years, he rendered yeoman service to our Dunston society, and to the Lincoln first circuit. He put his conscience into all his work, and amidst the storm and stress of life held on. As a preacher he was well received, and frequently occupied the pulpits of other churches. As Sunday school superintendent, he was punctual and regular, and most devoted to the children’s welfare. As class leader he was beloved, and many of his quaint and homely sayings will long be remembered. His illness extended over a period of nine weeks and during that time he gave evidence of his abiding confidence in God. Constantly he repeated the words:
“Not a cloud doth arise to darken the skies,
Or hide for one moment my Lord from my eyes.”

On Sunday, May 11th, Rev. James Keightley conducted an impressive “In Memoriam” service in our Dunston
“The memory of the just is blessed.”

William was baptised on 14 October 1832 at Scothern, Lincolnshire. His parents were Thomas, an agricultural labourer, and Ann.

William spent his working life as an agricultural labourer.

He married Catherine Blow (1834-1901) in the spring of 1861 in the Lincoln Registration district. Census returns identify five children.

William was uncle to the Rev. Herbert Semper.