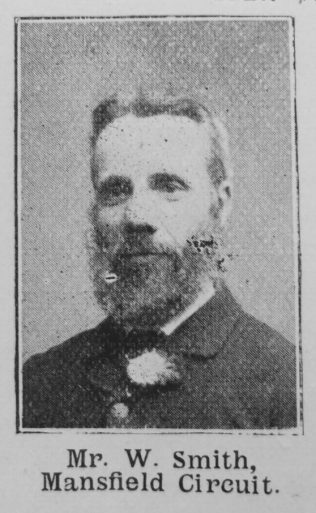 Transcription of Obituary in the Primitive Methodist Magazine by J.H. Hemshall

Bro. Wm. Smith, of Mansfield Woodhouse, finished his earthly course April 18th, 1901, in his sixtieth year. Born at Warsop, but came to live at Mansfield when six years of age. His father was a member and Sunday School teacher for many years. William, the son, was converted early, expressing desires after that which is good at seven years of age. It seems that from the beginning of his Christian life he has been willing and earnest in Christian service. He was even steady and constant in service, steadfast, immovable in his steadfastness, and always abounding in the work of the Lord as far as time and strength would permit. His loving spirit, earnest work, made him even acceptable and useful.

From the commencement of service he has ever had a warm interest in the young, and has excelled as a teacher in the Sunday School, while willing to do his best in other parts of the Lord’s vineyard. He was a candidate for the Local Preachers’ Plan of 1864, and became a pledged abstainer from intoxicants as a beverage in August, 1865. With the work of preaching he did not become so much taken up as he did with that of Sunday School teaching, to which he ever afterwards fully gave himself. Many know that in the few spare hours of long days of daily business he “searched the oracles divine” that he might find heartfelt words to speak to his class. What a student of the Bible was our brother. How he would endeavour to get away from everything else and seem to say – Let God speak to us from His Word. He could also make others respect and reverence the Holy Word. Bro. Robinson, Superintendent of School, says: “His knowledge of the Book and the arrangement for his Bible Class lessons were remarkable.” Perhaps it was well that this became his chief work of later years. The numbers he has led into the Kingdom of God, and in other ways influenced for good in this sphere, will not be fully known until the day declares it. Who can forget his punctuality in the services. We may also mention his liberality, for his means, like his abilities, have been freely used in the work of the Lord. He found it more blessed to give than to receive. The earnest teacher was also one of the best individual Missionary contributers on this circuit. For years he not only came to God’s house and brought his offering, but weekly in his own house set aside a fixed amount for the Missionary cause.

His religious life was deep-toned, and there was a marked absence of all pretence and show. The large companies present at the funeral, also at the memorial service conducted by the writer, testified to the place he held in the affections of his brethren and in the thoughts and respect of the townspeople.

The end came rather suddenly. We fear he had not sufficiently spared himself in doing daily and Church duty for some time. The writer saw him on the last Sabbath, when he was rapidly failing. He even then expressed disappointment at not being able to attend the sanctuary. In life’s later hours he asked for the 37th Psalm. He had also previously expressed a wish for his Bible Class to sing near him when he should be near death. This was in part gratified. They did sing in another room, and no doubt his heart ascended with their song. “Fixed on this ground will I remain,” was in his mind, also “My heart is fixed,” the Psalmist’s expression, was his constant experience, and on it stood calmly waiting until the Master came and called for his servant. The end found him ready. The family were summoned, known, and named one by one. Only a few hours before his spirit was to take its flight the text in Corinthians, “Thanks be unto God which giveth us the victory,” was repeated, and raising his hand twice, he added, “Through Jesus Christ Our Lord.”

William was born abt 1841 to parents John, a shoemaker, and Ann.