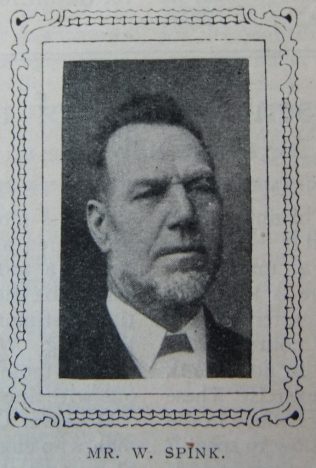 MR. W. SPINK is a product of village Methodism. Born in Norfolk sixty-five years ago, he spent the early part of his life at Aylsham, where he was converted to God in it cottage prayer meeting. Removing to Peterborough, he joined the first Circuit, where his name soon appeared on the Circuit plan. Deeply imbued with the Scriptures, possessing a homely style, and speaking direct to the heart, he is a preacher of great acceptance. But our brother’s chief delight is the Class meeting. He believes in the Class meeting as a means of grace, and a source of strength to the Church. Here he is at home, and his winning personality has drawn around him both young and old. He has not lost his youthful spirit, and his deep sympathy with young life is seen by the large number of young people in his class.

He believes in short experiences, and can lead sixty members in as many minutes. To a brother who spoke too long, he has been heard to say: “You have said enough for you and me, I’ll pass on to the next.”

In Doncaster, where our brother lived for some years, he conducted a successful class, and left a membership of over fifty. Returning to Peterborough, about ten years ago, he was requested to start a class in connection with New Road Church. Beginning with four members, he has made it one of the most successful on the station. Our brother is a delightful personality, one who is loved and honoured for his manly character, his transparent goodness, his simplicity of purpose, and his deep piety. He is a most loyal Primitive Methodist, and a generous supporter of her institutions. We pray that he may be long spared to serve the church he loves so well.

William was born in 1842 at Alysham, Norfolk.

Note: Some records have the surname ‘Spinks’