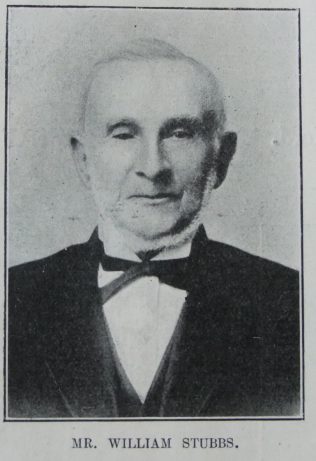 Transcription of an Article in PM Magazine 1909

Links with the Fathers

Of the many links with the past which during our centenary celebrations are being sought out, few are more closely connected with the founders of our Church than Mr. W. Stubbs. Born in the village of Weston, in West Cheshire, in 1820, of Primitive Methodist parents, he came into close touch with our worthy fathers, of whom he delights to speak as “those grand old men.”

While we were talking he pointed to a framed photograph of a thatched cottage which hangs in his kitchen, and said, “Hugh Bourne had his tea in that house many a time.” It was his father’s house at Weston. He tells how as a child, he and the other children of the village were fond of the lonely Hugh Bourne, who used to place his hand caressingly upon their heads and exhort them to be good.

On one occasion, as a curious child, he followed the venerable saint about the village to see what he would do; he saw him come to a low gate upon which he leaned and offered this prayer: “Lord, save all the people in this village.” Child though he was, he received an impression which four score years have not effaced.

He claims Hugh Bourne as his spiritual Father. At seventeen years of age he was brought under conviction, when he bought a New Testament which he read with strong cryings and tears. So contrite was he that he used to wander about in the fields weeping in the bitterness of his spirit. His friends thought he was going crazy. After having been in this condition for nearly three months, Hugh Bourne came to preach in the village. In the course of his sermon he said: “If anyone here wants to get saved I will tell you how to get saved,” and then proceeded by homely illustration to set forth the way of salvation. Young Stubbs listened eagerly, realising the message was for him, and decided to follow the preacher’s instructions. He gave himself unreservedly to God that night, lifting up his voice in earnest prayer and to use his own words, “he was saved in a moment.” He straightway joined the church and has been in unbroken membership ever since. Thereafter Hugh Bourne often gave simple, spiritual advice, encouraging him by little attentions and guiding him by kindly words.

Another who helped him much was Henry Higginson, whose advice our brother loves to repeat: “Read the Scriptures much and pray much.”

About three years after his conversion he was requested by the Sandbach Circuit Quarterley Meeting to preach, if “requested” is not too mild a word. A deputation waited upon him and told him he must preach at Basford the following Sunday night. His pleadings that he could not preach were of no avail: he must. He had the greatest difficulty in preparing, and not knowing what better to do, he learned about twenty verses in Acts ix., thinking that if he could do nothing else he could at least repeat them. By giving a little comment on each verse he managed to get through his first sermon. Though this was the expedient of despair he continued the practice for many years, committing to memory the greater part of the chapter from which his text was taken. In those ealy days he travelled long distances to preach the Word.

After he had milked the cows on a Sunday morning – for he was in farm service – he would set off to walk twelve or thirteen miles to fulfil his appointments, returning in the early Monday morning and sleeping in the barn until time to commence work. He was often planned at camp meetings with Hugh Bourne, for in those days he was a “son of thunder.” On one occasion he was asked by the Bournes to preach in the cottage at Bemersley, a request to which he gladly accepted.

In 1846 he found employment in the newly commenced railway works at Crewe, and joined our society in that rising town. In company with another brother, long since dead, he commenced a mission in 1863, in a new part of that rapidly growing town; a mission which has grown into our church in Mill Street. And it is due to his enterprise that it now occupies the grand site on which it stands. From the commencement of the mission until the present time he has been class-leader. John Wedgwood often met in his class, and many who have gone into the ministry, and many more who have joined the Church triumphant.

He is still doing what his age will allow in the work he cannot cease to love; preaching here and there, visiting his old friends and fellow labourers in the gospel, and availing himself of the means of grace. He delivered a few addresses during the last General Election – for politics are a part of his religion – showing from his own experience what Protection meant. He attended the great Centenary Camp Meetings on Mow Cop. When he arrived there he says he felt like turning aside to weep, as memories of the jubilee celebrations crowded into his mind. He recalled the “grand old preachers” who spoke on that occasion, and friends who accompanied him thither – all gone, leaving him a solitary survivor. But he did not think only of the dim past, he joined in the rejoicings and exercises of the present, and not withstanding his great age stood nearly all day, listening to the speakers, and there is no juvenile that acknowledges the wonder and power of the occasion more readily than he.

He has none of the moroseness of age, but is genial and hale, and enjoys a joke as well as any. He does not think Primitive Methodism has had its day or seen its best days, though he does think we are not so evangelistic as our fathers were. He rejoices in the stand our church tales on social questions, and at some of the changes that have taken place even in the class meeting. He is still full of love to the Saviour, still delights in His service, is still possessed by a holy passion for the salvation of men, and his prayers are always for the welfare of Zion. His words are often an inspiration to young workers. Though so advanced in years he is buoyant in spirit, fervent in hope, and remarkably active. May the evening of his life merge into the golden glory of the everlasting morning.

The 1841 census identifies William working as a farm labourer in the parish of Stapeley, Cheshire. Later census returns identify him as working on the railway, rising to be yard foreman at the railway works.