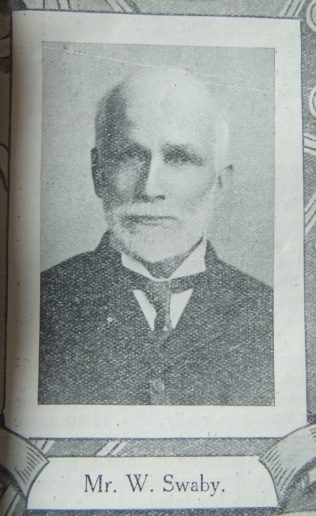 Through his long life William Swaby has been associated with our Church. At the first District Meeting held at Louth (1859) his uncle provided the lorry for the Camp Meeting preachers, the Rev. J Petty being amongst them. Mr. Swaby continues the tradition.

Forty-three years he has been a member of our Louth Society. His local-preachership numbers 42 years. His own services and those of his horse are always available. He passed a quarter of a century in the Sunday School filling the assistant superintendency for five years. A dozen years he conducted a Society class. As Society Steward his term reached 14 years and he has completed four as chief official of the Circuit.

He is a man of few words, never wasting time in any meeting; but his speech is wise and his counsel worth heeding. A man of sterling character, an official of unblemished record, a friend faithful and true, he is amongst men honourable in the Church.

William was born in 1836 at Louth, Lincolnshire, to parents Edmund and Mary. Edmund was an agricultural labourer and later became a carter as well as working the land. William was baptised on 12 June 1836 at Louth.