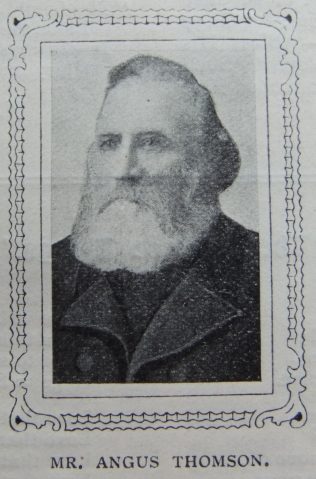 Since the days of the first disciples, the sea has aided in the development of a strong type of Christian character – whole-heartedness, like that of Peter, being its leading characteristic. No wonder then, that godly fisher-folk have been, and are a strong pillar in the Methodist Church in general, and in the Primitive Methodist church in particular.

The subject of this sketch has been associated with the sea from his youth. Born in 1843, his life has been spent in the fishing industry. Like Andrew and Peter, James and John, he was called to follow the Master from fishing-boat and nets.

During his early manhood the village was graciously stirred with a revival, which led to the establishment of cottage-prayer-meetings. At one of these meetings held in his own home, he surrendered to the claims of the King of Kings.

When, from the neighbouring village of Tranent, Primitive Methodism sought to establish for herself a home in Cockenzie, he was a foremost helper, and became at once a trustee for the new building. For thirty years he has faithfully served the Church as Society Steward, and like a good captain has ever been found at his post. By long and faithful service and material gifts he has shown his loyalty and love to the Church.

Let it be borne in mind that this has more significance than would a similar statement in regard to an English official. While Methodism has done much for Scotland it cannot be denied that it is still something of an alien faith. Presbyterianism is the religion of the country, and even now a Methodist in many places is regarded as a strange sort of person, of extraordinary strictness in morals and behaviour.

Mr. Thomson’s home has always been open to the preachers, who can testify to his hospitality. Sons and daughters are treading in the father’s footsteps and are devoted workers in the cause.

Angus was born in 1843 at Cockenzie, East Lothian, to parents Angus and Jane.

Angus followed his father as a fisherman.