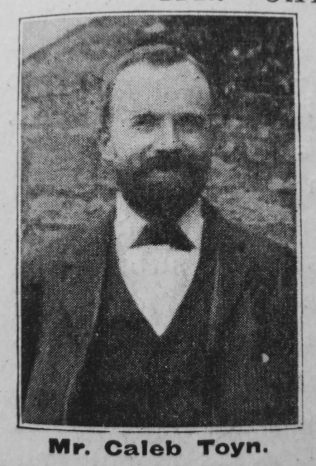 In the heyday of his manhood and when it was hoped long years of service were in store for him, Mr. Caleb Toyn, eldest son of Mr. Joseph Toyn, President of the Cleveland Miners’ Association, was called from the activities of life to his eternal rest.

While he was following his occupation as a telegraph Clerk at Middlesbrough, he was seized with pneumonia, and, after four days’ illness, passed away on June 7th, 1903, leaving a widow and three children (one of whom has since joined her father) to mourn his loss.

Although only 39 years of age, Mr. Toyn had followed Jesus Christ faithfully for over 32 years. Converted at seven years of age at Skelton in Cleveland he always had a definite Christian experience, and was ever ready to engage in any work for the Master. At eitght years of age he accompanied local preachers to their work, and his greatest longing as he grew up was to be a preacher of the gospel. We believe, however, the only time that he preached was in 1893, when accompanying his youngest brother to an appointment at Moorsholm, a heavy storm broke and he was left at Stanghow. No preacher turned up there, and, by desire of the friends, Caleb occupied the pulpit and gave a discourse that was much appreciated. He always preached, however, in the best way by a Christlike life and character. For many years he was Secretary of Saltburn Primitive Methodist Sunday School, and also did splendid work in the Society there, and when he removed to Middlesbrough on his marriage 11 years ago, he became an active worker in the Gilkes Street Church and School.

He was a bright and optimistic Christian, and carried sunshine and happiness whereever he went. We have known him for over 30 years and never heard an unkind or angry word escape his lips. His motto always was “I live for Jesus Christ, He will look after the dying.” And He did.

For over 23 years he worked in the Middlesbrough Post Office, and by his consistent life earned the respect and good will of the whole staff. It is something to say that Mr. Toyn was only late twice at duty in the whole of this time.

The remains were interred at the New Cemetery, Middlesbrough, on June 9th, 1903, when a large and representative gathering paid the last token of respect and esteem. As showing how much he was loved in the neighbourhood where he lived, it is worthy of note that every blind in Camden Street was drawn, a thing unusual in a town like Middlesbrough.

The coffin was borne by the colleagues of deceased, and prominent in the sad procession was a contingent of 30 telegraph messengers and many Post Office officials. The stricken father and mother were too ill to attend, but the other members of the family were present.

The service in Gilkes Street Church was fully choral and was conducted by the Rev. J.G. Bowran, who gave a beautiful and touching address. The Rev. J. Walton also took part. Letters of sympathy and appreciation have been received from all parts of the north of England.

We do not sorrow as those without hope.

Half-an-hour before he passed away Mr. Toyn said to his brother, the Rev. J. Toyn, who was present to the end, “Good night,  I’ll meet you in the morning!” And this blessed expectation sweetens pain and lightens, the gloom that has gathered.

Caleb was born at Upsell, Yorkshire, to parents Joseph and Mary Jane. He was baptised on 12 January 1864 at Marske, nr Guisbrough, Yorkshire.

He married Cozbi Watson (1865-1944) in the summer of 1892 at Middlesbrough, Yorkshire. Census returns and birth records identify four children.