Turner, Charles Frederick (b abt1854) 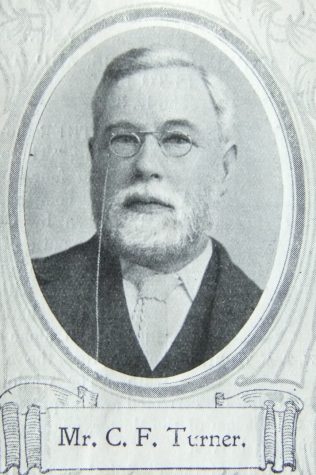 As the master of the Alresford Orphanage, Mr. Turner is known to many as a genial, generous and kindly man whose chief desire is that his “bairns” may grow up to become steadfast and loyal Primitive Methodists.

As controller of the Winchester station exchequer he has a strong aversion to adverse balances. He places the circuit fund first and foremost, and seeks to relieve the minister of all financial worry. He is characterised by strong and sound judgement, a wide knowledge of finance and a deep devotion to the interests of the Church. A local preacher for twenty-five years, he is a keen reader and careful presenter of his message. Conferential honours have come to him and he is widely respected as one always anxious to extend the scope and usefulness of his own denomination.

We trust he will be long spared to carry the purse of the Winchester station.

Charles was born abt 1854 at sea on an English ship in the Indian Ocean, to parents Frederick Turner and Barbara Rugless. Frederick was a master mariner at the time of his marriage in 1844.

The 1881 census identifies that Charles was working as a merchant’s clerk, E. Indies, living at Mile End Old Town.

Charles and his wife started work at Alresford PM Orphanage in 1891.