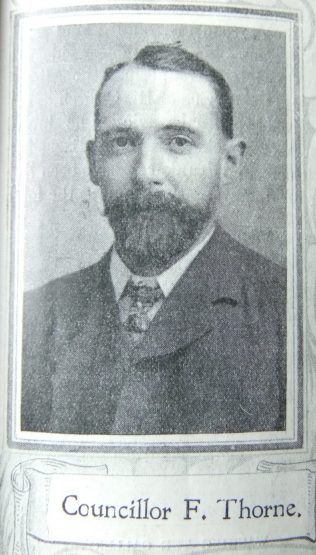 The senior Steward of Poplar Circuit is a Devonian by birth. He has lived in London since he was three years old, and for thirty-eight years has been connected with our Cubitt Town cause as scholar, teacher, secretary, organist, steward, treasurer, etc. Genial, generous, optimistic, endowed with common sense and the capacity for hard work he has long been a leader of the church. The beautiful sanctuary at Cubbit Town is largely due to his initiation.

The public have claimed his services. Five years ago he entered the Borough Council, and three years later was elected Mayor, in which capacity he distinguished himself. The London County Council have honoured him as builder and contractor with the erection of many important structures, showing their confidence in him as a man of substance, integrity and efficiency. He is destined to go far in Connexional recognition, and usefulness to the community.

Fred was born on 21 June 1867 at Langridgeford, Yarnscombe, Devon. He was descended from James Thorne, one of the founders of the Bible Christians. At the age of three, Fred came under the care of an aunt, who took him to Cubbitt Town Sunday School. He became a church member when aged thirteen.

On leaving school at thirteen, Fred was apprenticed to his uncle, a builder. On the death of his uncle when Fred was twenty-three he was launched upon a business career as a builder and contractor. He later took his brother Tom into partnership.

Fred was one of the founders of Millwall Football Club, and it was on his suggestion that the club prohibited the sale of drink on its grounds, the first club in London to adopt this policy. Fred was also appointed a Justice of the Peace.