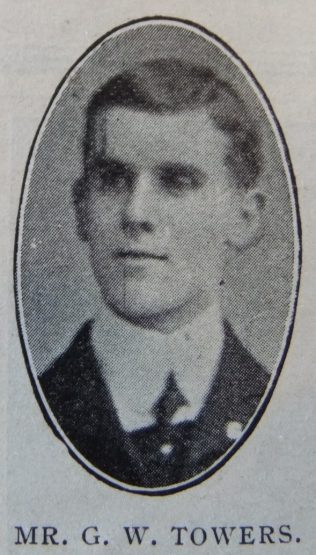 MR. G.W. TOWERS passed away on the 6th of May, 1910. From his earliest days he lived in the most intimate association with Primitive Methodism. His active membership dates from the time of his conversion at the age of thirteen years. His juvenile interest in Sunday school, Missionary and Band of Hope affairs, proved a true prophecy of the devotion that characterised his youth and early manhood. From that period he revealed an unflagging zeal on behalf of all worthy objects set forth to promote the Welfare of his Church, serving in the various capacities of Secretary to the Sunday school and President of the Christian Endeavour Society. He also rendered conspicuous service as Sunday school teacher and local preacher, and was received with great acceptance in all the Circuit pulpits. But it is perhaps at Toronto where his loss will be most keenly felt. It was in this school and church that he received his earliest impressions for good, and he was never slow to acknowledge gratefully the helpful influences exerted upon him by the various leaders of this society. He evinced an intense devotion to the Adult Bible class, of which for several years he was teacher. On the occasion of his removal to Bishop Auckland, the members marked their deep appreciation of his services in a tangible way.

Throughout his illness he maintained a calm and courageous bearing and furnished a brave example of one who knew how to suffer as in the time of health and vigour he also knew how to serve. He died in his twenty-seventh year, and to the end was strengthened and sustained by the inspiration of the Immortal Hope.

The funeral service was conducted by Rev. B. A. Barber, assisted by Revs. W. H. Campbell and J. Chaplain (Congregational) and A. R. Doggart Esq., all of whom paid glowing tributes to his sterling worth.

The interment took place at the Bishop Auckland Cemetery in the presence of a huge concourse of mourners.

George was born abt 1883 at Evenwood, Co. Durham, to parents Henry and Jane. Henry was a coal miner.

The 1901 census return describes George as a clothier’s assistant.