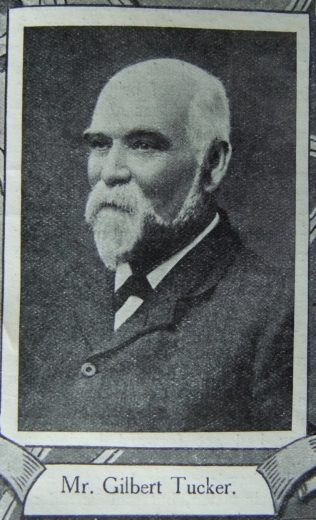 Mr. Gilbert Tucker, Senior Steward of Loughborough Circuit for the past ten years, became a member at Swan Street nearly fifty-six years ago, and under Dr. S. Antliff’s guidance soon began to preach. After fifty-three years’ preaching he is as acceptable and energetic as ever. Quite recently he conducted services on ten Sundays out of thirteen. He holds the record for his home ministry, having preached over five hundred times to the Swan Street Congregation. He is in great request outside the Circuit for special services. He has performed all the duties of a minister, having baptised and married and buried members of our Church. He has also sat in seven Conferences. Mr’ Tucker has rendered distinguished public service as County Councillor; Town Councillor and Alderman; Guardian; and Vice-Chairman of the School Board; and has been invited to be Mayor. He is to-day Vice-Chairman of the Loughborough Education Committee.

Census returns give the following occupations for Gilbert.

Gilbert married Eliza Trueman (abt1840-1886) in the summer of 1859 in the Basford Registration District, Nottinghamshire. Census returns identify eight children.