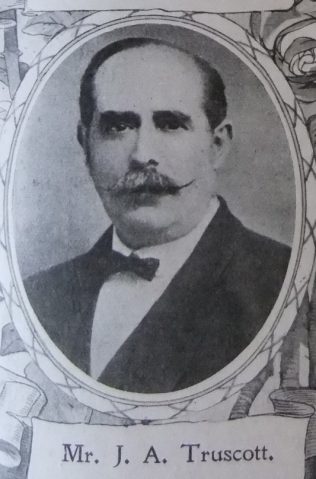 Mr. John A Truscott, Senior Steward of Plumstead and Woolwich Circuit, comes of good west country Methodist Stock. Born at Penryn, Cornwall, he removed to Woolwich in 1871, owing to depression in the mining industry, and was converted in 1877, having been much impressed under the ministry of Revs. Danzy Sheen and the sainted John Phillips. Secretary of the School for ten years, and Circuit Steward since 1899, he has been closely associated with nearly every branch of our church work at Robert Street, Plumstead. He has also been a hard worker in the Band of Hope, being a great opponent of both liquor and weed. He has rendered most valuable service a pew steward. With his good wife he regularly attends the weekly class meeting, and is in every was a man much respected and loved.

On moving to Woolwich, John worked at the ordnance factory. The 1881 census identifies him as a foreman. Later census returns give his occupation as store-holder and in 1911 he is described as a retired civil servant – army ordnance department.