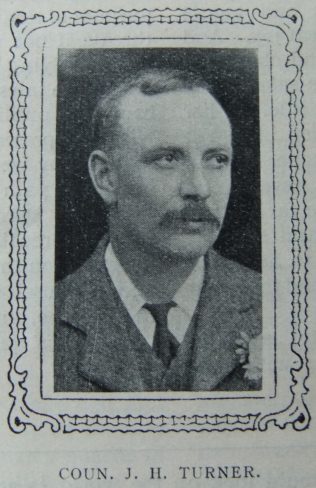 MR. JOHN H. TURNER is a Primitive Methodist of the third generation. In the Cleethorpes Centenary Roll, in addition to generous amounts for himself, wife, and each of his children, there are four names for which he has subscribed £5 each. One of these is “The late Caroline Wright” – his grandmother – one of the founders of our Cleethorpes Church. For nearly twenty years he has filled the office of assistant and Society steward. A good financier, his books and accounts are always in order; but better still is the spiritual atmosphere he helps to create. Before he comes to worship he has been closeted with God in prayer, and before the minister leaves his vestry and enters the pulpit he kneels down and prays that God will bless the preacher and inspire his message.

He is a Sunday school superintendent and most gifted for conducting an infants’ department – an expert at black-board drawing and lesson illustrating. For twenty-one years he has been President of the Junior C.E., and scores of young men and maidens owe much to his teaching and influence. Though not on the plan, he is a preacher of much acceptance, and his services are in great demand. And what a power he is at the Sunday night’s prayer meeting! He is a host in leading the singing and inspiring the praying. In politics he is an ardent Liberal, and has rendered yeoman service to his party. He is one of the most popular political speakers in the district, and few men have such genius for addressing great open-air gatherings. Last March he contested one of the wards for a seat on the Urban District Council, and won by a handsome majority. Long may he be spared to serve his Church and country.

John was born in 1867 at Cleethorpes, Lincolnshire, to parents Miller Byron Turner and Elizabeth. Miller was a brickmaker.

John was a fish merchant.