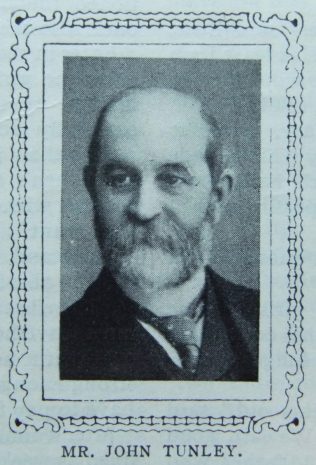 MR. JOHN TUNLEY, of Boundary Street Church, Liverpool Second Circuit, possesses in happy combination many of the elements which are essential to the making of a successful Class leader. He has a wide experience of men and things. Being a business man in the city of Liverpool for some forty years, he has come into daily touch with men and women when their thoughts and aims are necessarily directed towards making a living. He therefore sees the people at their worst and their best.

The note of certainty is in his religion. Then his religion is all aglow. He lives in the white-heat of passionate love to his Saviour. Behind the shining face and quiet demeanour of our friend there is an unexpected depth of spiritual fervour. When deeply moved it flames forth as the pent-up fires of a furnace. His sense of Divine Providence is unshaken, and his belief and experience in the value of prayer are unmoved by all the questionings of the world. Mr. Tunley believes in the sanctification of the believer’s heart from sin by the indwelling of the Holy Ghost, and seeks its realization within  himself.

With this combination of a strong personality, a wide experience of human nature, an understanding pity for struggling souls, along with a keen relish for “the fellowship of the saints,” he is an elect shepherd of the sheep.

At present he shares the duties of his pastoral office with others who are true fellow-labourers. In these hustling days the numbers attending the meetings are diminished, but the spiritual value and practical worth, the homely fellowship and soul-adjusting revelations are not wanting. Long may this type of a Primitive Methodist Saint remain with us!

John was born in 1845 at Llanbodwell, Shropshire, to parents William and Jane. William was a farmer.