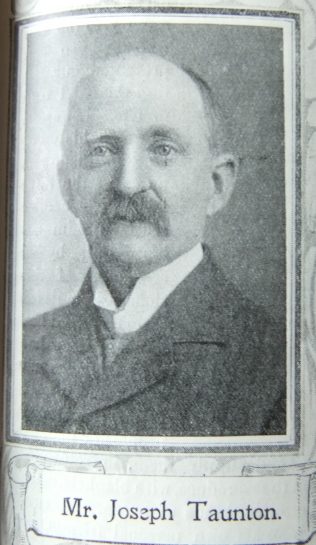 Coventry First Circuit is greatly honoured in its steward. For seven years Mr. Taunton has given unstinted devotion to the office, caring for the circuit’s finances and jealously safeguarding all its interests. And it in turn has honoured him. He has been several times to District Meeting and in 1907 was delegate to Conference.

He is Equalisation Fund Treasurer, for which office his retirement from business gives him ample leisure.

That he has won the esteem of his fellow tradesmen is evident. He has been for some years President of the local branch of the Bakers’ and Confectioners’ Association.

His domestic surroundings are of the happiest. His wife – a true help-meet – and his two sons are members of our Church. The younger son has recently matriculated at London University and has now entered Birmingham University. Our Chancellor is still in life’s prime and has, we trust, many happy years of service ahead.

Joseph was born in 1858 at Coventry, Warwickshire, to parents Joseph and Maryann. Joseph, senior, was a silk weaver.