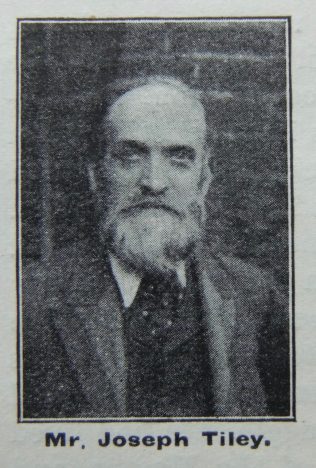 Transcription of Obituary in the Primitive Methodist Magazine by Geo. Rudram

Mr. Joseph Tiley was born in Wiltshire on the 23rd of August, 1840. After residing there for some little time, his parents removed to Chigwell, and thence to Islington. Our brother was converted about the year 1859, in our little chapel in Stuckley Place, Camden Town, under the preaching of the late Rev. Thomas King, who was then at the Book Room. Mr. Tiley entered the firm of Shoolbred and Co. in the year 1860, and was noted for his piety. He married on the 24th of July, 1865, Mary Ann Sanders, whom he met at Stuckley Place Chapel. On removing to Kentish Town, he joined our Society there about the year 1870, and continued until his death one of its staunchest supporters and workers. He became a class leader in 1873, and also a Sunday school teacher. He was elected superintendent for the year 1880. He afterwards became superintendent of the infant division. That office, as well as many others, he held as long as he lived, and only those who knew him best can tell what those little ones were to him. He became treasurer of the school in 1888, and he was elected Society steward about the same time, which offices he ever afterwards retained. He was one of the mainstays of the temperance cause and Rechabite Tent meeting at Grafton Road. He lost his first wife on the 22nd of May, 1897. She had been to him one of the best of wives, and brought up the family to reverence and love God’s house. In course of time he married Sarah Petty, who at once became a true helpmeet for him in all things, in the home and in the Church. After tenderly nursing him during his illness she now mourns her loss. What a manifold vacancy his decease has made in our Church! The children will not soon forget him. Our departed brother had just the sympathy and patience and tact needed to deal with child-life, and he seemed to regard it as his special work to feed Christ’s lambs. How anxious and diligent he was in getting together the funds for the Quarterly Meeting. He was a most consistent official as well as a zealous worker. We shall miss him very much from the meetings of the Y.P.S.C.E. When well, he was one of the most regular attendants, and always had a word of cheer. When he retired from his usual occupation, he purposed doing many things in connection with Church work, for which his anticipated leisure would have given him opportunities. God had other employment for him. Mr. Tiley departed this life on Saturday, January 31st,1903. Although his decease was so sudden at the last, and unexpected to most of his friends, we should be thankful that the end came without pain or struggle. He had lived in readiness for the call of the Master, and now there was no shrinking or dread, or perplexing apprehension. His death was just a standing still of the physical machinery – a falling asleep in Jesus – a quiet passing away to be for ever with the Lord. He had walked with God, and he was not, for God took him. The funeral took place on Thursday, February 5th. A service was held in Grafton Road Chapel, conducted by Rev. G. Rudram, in the presence of a large concourse of people. The remains were interred in Highgate Cemetery. A largely attended memorial service was held at Kentish Town Chapel on Sunday evening, February 22nd, 1903, in which the Rev. D.T. Maylott and G. Rudram took part. May we all meet him in “our heavenly home beyond the sky.”

Joseph was born at Biddestone, Wiltshire, to parents Charles and Sarah.

The 1861 census return describes him as a porter. Thereafter he is described as a carpet planner.