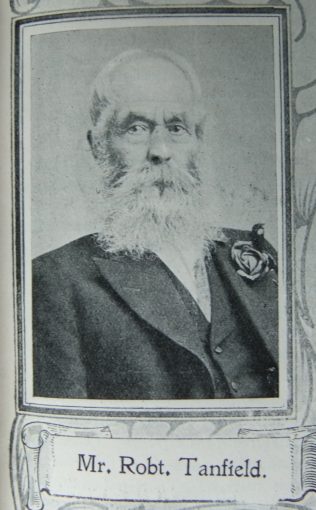 Mr. Robert Tanfield, of Bradwell Circuit, is in his eightieth year, and has been a member of our church nearly sixty years. During the time he has been an earnest worker in various branches of the service, but especially as a local preacher.

Both his Station and District have recognised his worth. In the parish of his adoption he has occupied several responsible positions, and is at present the Overseer, an office he has held for many years. He has been Chancellor of the Circuit since 1885, and has creditably managed the finances rarely having a balance on the adverse side of his book.

Creeping senile decay has compelled him to relax somewhat his activities, but in spirit and interest he is still going strong. We hope he may be spared and able to render a little service for a few years yet, before he hears the Master’s “Well done.”

Robert followed his father’s trade and became a tailor and draper.