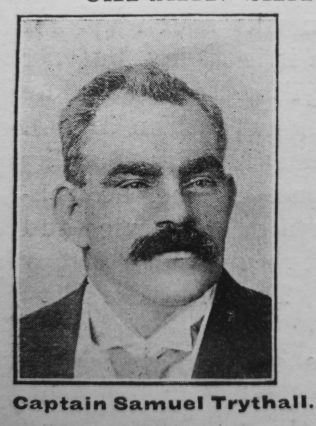 Transcription of Obituary in the Primitive Methodist Magazine by Alfred Warcup

Our Camborne church in the Redruth Curcuit has lost a valuable friend through the death of Capt. Tyrthall, who, at the comparatively early age of forty-nine, was called to higher service “beyond the river.” He was the second son of the late Francis and Catherine Trythall who were amongst the early members of our community in Camborne. He responded to the Gospel’s call when twenty-one years of age, through the ministry of the Rev. John Sadler, who remembers the blessed event so well that after nearly thirty years he can give a graphic description of the occasion.

“Having put his hand to the plough” there was no “looking back.” In a short time we find him local preacher, class-leader, and school superintendent. With all departments of church work he was in hearty sympathy, giving to each substantial support. At the end of eight years of such service in his native town, and in the circuit, he left for Spain, where for eighteen years he was the trusted agent of the Rio Tinto Copper Mines. Here, in a Roman Catholic country, he was true to Protestant principles, and preached the same gospel to the Spaniards that he had done to the Cornish miners. He formed a Band of Hope, and induced many persons to sign the temperance pledge. He became very popular, and was respected by all who knew him. At intervals he returned to England to visit his wife and family, and was with them in September, 1901, after which he went back to Spain, but this time on behalf of the Viella Copper Company.

Mr. Trythall anticipated this term of foreign service to be his last. His wife, family and many friends were cheered with the idea. Indeed it was the last term, and it was soon to come to a close; for a few months after he was caught in a thunderstorm, crossing the mountains, got wet through, and caught a chill, which led to his decease on the 6th May, 1902, at Vilaler, Lerida. In that land where he had given so many years of faithful service, his body was laid to rest, with many signs of respect and regret.

At home, on Sunday evening, May 25th, a memorial service was held in the Camborne Church, which was filled with a large congregation. The preacher was Rev. John Turner (circuit superintendent), who chose as his text, Psalm 23, v4.

Our dear brother has left behind a devoted wife, four sons and two daughters, who are closely attached to the Church their departed loved one served so well.

May they be able to say, “The Lord gave, and the Lord hath taken away; blessed be the name of the Lord.”