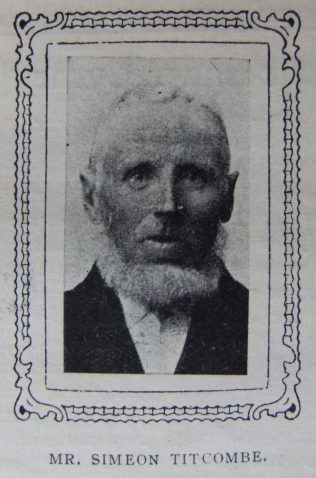 MR. SIMEON TITCOMBE is one of the “Grand Old Men” of the Brinkworth Circuit. He was born at Bury Hill Farm, Braydon, on March 23rd, 1842, and converted at an early age. When he attained the age of nineteen years he became a member of our Society at Purton Stoke, and has continued to labour in that sphere ever since. For thirty years our Brother has been a Class leader, thinking nothing of a three-mile walk every Sunday morning to meet with his members by nine o’clock. One thing he always is most anxious to impress on their minds – the love of giving, and good sums are realised and sent to the Quarterly Meeting.

For the same number of years he has held the office of Society steward, and in that capacity has proved true and faithful. Not only to his own church at Purton Stoke does he devote all his energies. For a great many years he has been one of our most earnest and willing local preachers. He has always taken the greatest interest in young people and his bright sunny disposition and personality gain their love and attention, speaking well for the Master he delights to labour for. He is always a great believer in the prayer meeting and has proved it a true means of grace, and he is a constant supporter of the Week-night Service. For half a century he has had the reputation of being a total abstainer.

Brother Titcombe finds in his wife and family true helpers, labouring with him in the cause so near and dear to his heart, one son being a local preacher. Our prayer is that our beloved brother may be spared for many years to labour in our vineyard, and when his call comes to go up higher his greeting will he “ Well done.”

Simeon was born at Braydon, nr Cricklade, Wiltshire, to parents Richard and Elizabeth. Richard was a farmer.

Simeon died on 23 December 1913 at The Brook Farm, Purton, Wiltshire.