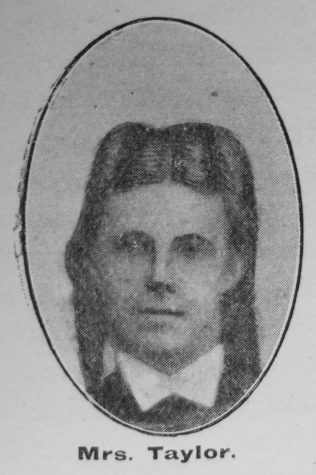 Hareholme Society of the Helmshore Circuit has recently experienced a sad loss in the death of Mrs.Taylor. Mrs. Taylor, whose maiden name was Susannah Scott, was born at Helmshore in the year 1847, and after a painful illness, extending over a year, died at Hareholme on Friday morning, June 13th,1902. Her early days were spent at Helmshore, where she had the inestimable advantage of being surrounded by Christian influences, which must have prepared her for the Christian life and work that was before her.

The religious life of our sister was always identified with our own church. Although broad-minded and kindly disposed towards other churches, she rightly loved her own Primitive Methodist Church the best. About forty years ago she realised what is meant by a change of heart, and became a member of the Rawtenstall Society at that time. Conversion was a real thing with her, as her life clearly evidenced. In her times of trial, bereavement, and later on of personal suffering, her great hope and consolation was the religion of Jesus Christ. When our cause at Hareholme commenced, she severed her connection with the Rawtenstall Society in order to assist in the working of the new mission. With the exception of five years spent at Southport, she, since the time of its inception, maintained her connection with Hareholme Society. Mrs. Taylor was, indeed, a great help to our Zion. She was always ready to give generously and to work diligently for the building up of the spiritual and material interests of God’s cause. By her kindly, hopeful, frank, and energetic disposition she endeared herself to a wide circle of friends, who, whilst now mourning their loss, can also rejoice in the hope of reunion hereafter. During the greater part of her life, Mrs. Taylor was blessed with that priceless boon “good health.” Despite this she was stricken by a dreadful malady which is so prevalent now, and for twelve months suffered all the tortures of that hopeless, cruel disease. Everything that love and sacrifice could do was done to check the inroads of this subtle disease. Her two daughters lovingly and faithfully ministered to her needs and soothed her sufferings.

The strength of our sister’s Christian character was manifested in this prolonged affliction. Her patience, fortitude, and trust in God cannot be exaggerated. She passed through the various stages of her affliction strong in the strength of God, and when the climax came was simply translated from her agony and pain into the land where there is neither suffering or sorrow.

Her brother, Mr. Scott, says he will never forget the conversation he had with her the day before her death. She spoke freely to him of her position and her bright prospect. She expressed that “Jesus was her supreme delight.” “His name was music to her ears and gladness to her heart.” Mr. Scott was also with her the night before she died, and he says “she had on her face the bright light of a great hope.” She said to him “I hope to open my eyes in heaven in the morning.” Later on, having slept, on awakening she spoke of the visions of hope that had come to her in her sleep, and shortly after she passed to her eternal home.

Susannah was born to parents George, a cotton fulling miller, and Ellen.

Susannah married John Taylor (b abt1839) in the summer of 1887 in the Haslingden Registration District. John died before Susannah, but I have not been able to unambiguously identify his death record.