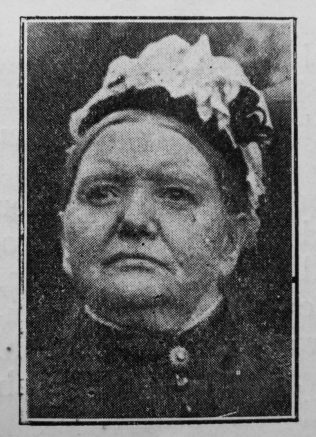 She was discreet, conscientious, industrious and methodical. Her outlook on life was hopeful, her grasp of truth strong, and her experience of God ever-deepening. Her power in prayer was marked.

The Rev. J. Holroyd bears testimony to this in his appreciation of her: “Some of the prayers she uttered in the Sunday night prayer meetings in Great Horton Chapel, when I was but a boy, I remember as clearly as if only uttered last week. And the influence of them has never passed  out of my life.”

Her greatest joy was to lead an anxious inquirer into the Kingdom of God, and much success attended her efforts in this work. Serving in such a spirit she won the love and esteem of many.

Mr. Comidge, F.R.H.S. (the historian of York Primitive Methodism) writes: – “I have recollections of her goodness, of her exalted piety, and of her charitable disposition. I account her one of the best women I ever knew, she was one of earth’s noblewomen.”

In all the Circuits on which they laboured Mrs. Tanfield did good service, and later ably assisted her husband in his work as Connexional Treasurer. Settling, on superannuation, in York, where they had spent two terms of useful ministry, Mr. and Mrs. Tanfield joined the Victoria Bar Church, and took great interest in its welfare.

During the last year she suffered acute pain through trouble with her eyes, and the way she bore her pain impressed all who saw her. At the beginning of April strength began to fail rapidly, and after six weeks of weary sickness she fell “on sleep,” May 7th, 1906.

The Rev. Alfred Johnson, a friend of long standing, characterises her as “an affectionate wife, a loving mother, a true woman, a thorough Christian, a faithful friend.”

The Rev. F. Smith writes: “Mrs. Tanfield was a woman of deep piety, who could offer the prayer of the righteous which often availed much,”

The Rev. W. Wheeler says: “I have often admired her patience and courage under prolonged affliction. I shall not soon forget her cheerfulness and buoyancy of spirit, her unceasing interest in the work of the church, her joy in its prosperity, and her unselfish consideration for the welfare of others.”

The interment took place in York Cemetery on May 9th, the Revs. J.P. Osborne, L. Stafford, J. Hallam, and J.H. Hirst taking part in the service, and the quiet influence in the home and at the grave was felt to be fitting for one who in sure confidence had passed from a long full life of service to the eternal peace.

Isabella was baptised on 1 January 1826 at Kirby on the Moor, nr Boroughbridge, Yorkshire. her parents were Samuel Simpson, a labourer, and Ann.