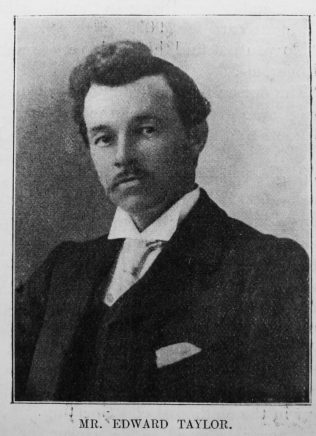 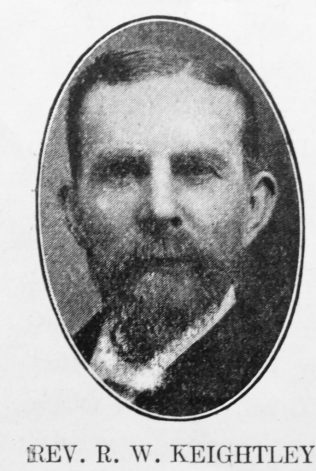 Transcription of Sketch in the Primitive Methodist Magazine: Part of a series entitled Chats with Successful Class Leaders by Robert W. Keightley

The class meeting is one of the glories of our past, and one of the problems of our present. It is not worn out; not senile decay, but mistaken treatment is the cause of its lamentable enfeeblement. It may, and we fervently hope it will, recover all its former vigour and utility.

Mr. Edward Taylor, the subject of this “chat,” was brought near to the kingdom of God by his school teacher, Mr. G. King, of Driffield. He was led into the kingdom by ‘his own brother ” Henry, who is still a useful official on the Scarborough first station. Edward became a local preacher twenty-three years ago, and has seen much fruit of his ministry.

He was appointed assistant class-leader on the Pickering Circuit in 1884, and had the satisfaction of seeing the class prosper. In 1890 he went to reside in Scarborough, where he joined the Jubilee Church, and three years later he was appointed to lead a class of thirteen members, with an average weekly attendance of six. To Mr. Taylor this condition of affairs was unsatisfactory and intolerable. But, as we shall see, matters quickly changed for the better. There are now nearly one hundred names enrolled in the class, and eighty-seven members were reported to the last quarterly meeting. Mr. Taylor, however, shall narrate his own story.

Asked as to methods of working the class the leader replied:
“I put in fifty-two attendances in the year, and am never absent except through sickness or some entirely unpreventable cause. I have only been absent nine times in thirteen years. I reserve Thursday evenings for God and my class. Our meetings are conducted on the old Methodist lines. We seek to cultivate a deeper spiritual experience, and we encourage the good habit of personal testimony. We have tried nothing novel and don’t intend to,”

“Have you any particular plan of visiting absentees?”
“We have a visiting committee of twenty members appointed by our annual meeting. A printed card is used, on which the name and address of the absent one are given, and the report on each case is written on the back of the card and read to the class the following week. To all cases of sickness gifts of flowers, fruit, etc., are taken by members of the Committee. Letters of sympathy are written to those in sorrow, and in case of the decease of a member a wreath is sent by the class, and as far as possible the members attend the funeral.”

“Have you any social gatherings in connection with your class?”
“Occasionally we have what we call ‘an open meeting.’ Each member is supplied with a card of invitation, and can bring an outsider to the meeting. Then early in each year we have our class tea, and to the meeting following I give a report of the class as to the number of members, money raised, removals, letters of sympathy sent, visits paid, etc. Our ministers attend this meeting, and give brief addresses. The leaders and committee are chosen by this gathering each year. By this method we secure and retain the confidence and interest of all the members in the management and work of the Class.”

“Do you lose many members through removals and other causes?”
“Yes, we have a very considerable leakage. That, I suppose, is unavoidable. In thirteen years one hundred and eighty names have been removed from our roll of members. When members are about to remove from us I write to the minister of the station to which they are going, and this has saved many of our young people to the church. I frequently receive replies from the ministers to whom I write, and from those I write about, but not in all cases by far. We attach a great deal of importance to temperance in the class, and we have our own pledge card, which we desire every member to sign, and to which I append my name. It has been an inestimable blessing to our members.”

“Have you any difficulty in conducting so large a class meeting in a reasonable time?”
“None whatever. Punctuality is a virtue, I begin promptly at the appointed time. We encourage brief speaking and praying, and with from forty to sixty members present our meeting does not usually exceed an hour. A class meeting must never be allowed to become tedious, or to interfere unnecessarily with the claims of home-life and domestic duty.”

“Do you collect the contributions of your members weekly, or at the end of each quarter?”
“I call out every name each week, and the members hand in their class money as their names are called. We find this method acceptable to the members, and useful to the church, as we send over £5 per quarter to the leaders’ meeting.”

“Have you any other special feature in your modes of operation?”
“Every year I send to each member one of the Connexional motto cards, with an address in which I review the work of the past year, and give suitable counsel and encouragement for our future life and work, and in each one I urge the necessity and the privilege of every member being filled with the Holy Ghost. I warn my flock against living on the past, and assure them that the ‘best is yet to be.’ Only a few days ago I received a letter from a past member now living in Canada, asking for a motto card for 1907.”

“Do you not find the work very exacting and onerous?”
“The demands it makes upon my time and strength are great. I feel the responsibility of it more and more as the years go by. But I love it. I have always loved the class-meeting. When I remember how many souls have been saved in the class, and when letters come to hand almost continually telling of blessing received in our meetings, I am amply compensated for any sacrifice and labour expended on the good work. And then the hearty co-operation of the members, and the valuable help of my assistant, Mr. R. Hunter, make work a pleasure, and duty a sweet delight.”

“Then I conclude that you are a firm believer in the Methodist class-meeting.”
“I never believed in its power for good more than I do now. I am more than ever convinced that class-meetings are the strongest pillars in the Methodist Church and my conviction is, that if we had made more of them, we should have been a much mightier people to-day than we are. There is much talk about the class-meeting being a failure. The failure is not in the institution. Given suitable men and women as leaders the class-meeting will recover its ancient power and glory, and the flock of God will again feed in the rich pastures of a deep and glad spiritual experience.

“What collection of hymns do you use in your meetings?”
“We find our own Mission Hymnal very suitable. We like the stirring hymns and lively tunes contained therein, and these accompanied by the piano help to lift us heavenward.”

It was more than refreshing to hear such a glowing account from our beloved brother. When so many of our classes have almost “ceased to meet,” and others are languishing into death, it is as a breath of mountain airy to learn that we have yet living class-meetings, led by live leaders, and that in them the soul-life of our people is being nurtured, and the evangelistic work of the church is being successfully done by those whose chief concern is to “walk with God.”

A few hundreds of men such as Edward Taylor would work wonders of spiritual enrichment and enlargement in our Zion. With the Centenary celebration at hand, when our thoughts will go back to our beginning as a church, it will be a priceless boon if we catch once more the passionate desire for Christian fellowship in which our founders and fathers found so much spiritual nourishment and conquering joy.

Let not the reader imagine that Mr. Taylor has been specially favoured by birth or other circumstances. His intellectual endowments are not above the average. Educational advantages were not showered upon him in lavish abundance. He is a busy man of affairs. But his soul is in his work, and the tact and resource born of an enthusiastic love have, by the Divine blessing, placed him among our “successful class-leaders.” He burns with spiritual devotion, and shines in fruitfulness and service. Doubtless still larger blessing is in store for him and his prosperous flock.

Edward was born in 1862 at Great Driffield, Yorkshire, to parents Richard, a gardener, and Jane.

I have not been able to identify the date of Edward’s death.