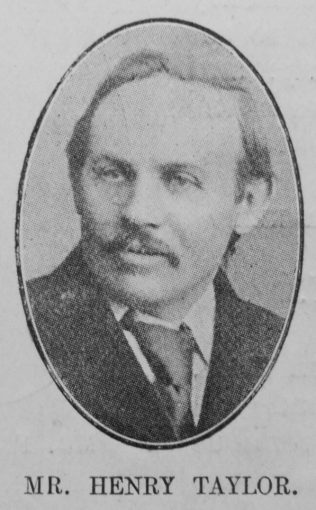 Henry Taylor was born at Driffield in 1852. He was associated with our Sunday School there from three years of age, converted while a youth, and became a local preacher. For more than thirty years he was connected with Jubilee Church, Scarborough, where he was one of its leading and most valuable officials. He was successful in business, and fervent in spirit, serving the Lord. He loved his Church, and was ever ready to sacrifice and to serve.

When it was found to be imperative to provide additional school accommodation for Jubilee in the initial stage, when £1,200 debt on the Church had to be removed, our brother very generously contributed £250, which was a self-sacrificing gift. He was a most liberal supporter of the Church financially. But he gave himself with untiring devotion. He was a very thorough Christian and studied well the word of truth and life. He gave himself much to prayer, and a marked characteristic was his power in prayer in the public services. He was of a type so sadly lacking in our Churches generally today. He prepared himself very thoroughly for pulpit work, and was very efficient in that department.

His chief sphere and the one in which he will be most missed in the Church was among the young men. For years he conducted the Young Men’s Bible Class, and Mutual Improvement Class, and his influence will have been a life-long benediction to many. He was called from the work of the Church when he seemed most needed. The Church has good reason to lament his loss. His removal was quite unexpected. He was stricken down when only fifty-six years of age. The Church has lost a true friend. He was exemplary as a father and husband, and intense sympathy is felt for his sorrowing widow and daughter, and three sons. He has gained the crown of life, a crown decked with precious gems; for many were the souls led by him to Christ.

As we have already stated, Henry Taylor was a generous man, but he gave something better than money to the Church, and not the least. valuable contribution he made to it was his prayers. How he wrestled with God! There were times which we can never forget when he appeared to take hold of God and prevail. He was indeed a man mighty in prayer. Then he rendered very valuable service in connection with the Bible class, and many will long remember with deep gratitude the good they there received. To have been able to render service in these two ways is an eloquent evidence of character. But character was the most impressive feature in Henry Taylor. It was not merely what he did, but what he was. May the memory of his worth and work be an inspiration to all who had the privilege of knowing him.

Henry was born in the summer of 1853 at Driffield, Yorkshire, to parents Richard, who worked the land, and Jane.

He married Mary Alice Dring (abt1859-1939) in the spring of 1878 at Driffield, Yorkshire. Census returns identify four children.