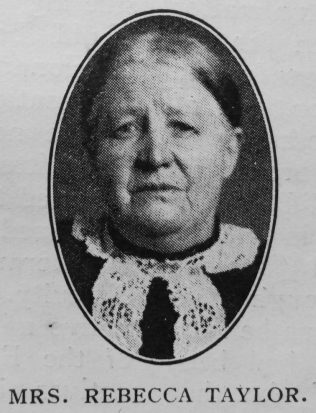 Transcription of obituary published in the Primitive Methodist Magazine by T.C. Showell

Mrs. Rebecca Taylor, fifty years a member of Grove Road Church, Haslingden, who passed away in June last, was born July 12th, 1844. Eldest daughter of Mr. and Mrs. James Cronkshaw, whose six children are still with us, she was converted under the ministry of Dr. W. Antliff.

Uniting in marriage with Joseph Taylor, her home became the dwelling-place of the Most High. She experienced an unusual share of sorrow, losing a boy of six years by drowning, a little daughter a few months later, having to face the shock of seeing her husband brought home for dead, and her son severely crippled by an accident. Upon this succession of sorrow, severe heart trouble supervened.

She and her husband nobly stood by the Church in its days of struggle. Our sister loved God’s House and God’s people. Unostentatious, a woman of few words, she was sincerely devout. She could call to mind the messages and work of such men as Dr. W. Antliff, Jas. Macpherson, and others, and could tell of the visit of Hugh Bourne, who patted her head and said “God bless you.”

When the summons came she was ready, and quietly, and almost imperceptibly, passed within the veil.

Rebecca was born on 12 July 1844 at Haslingden, Lancashire, to parents James Cronkshaw, a blacksmith (1851), and Jane Holt. She was baptised on 28 February 1847 at Haslingden.