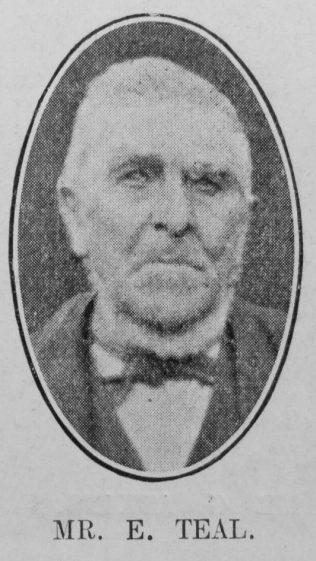 Transcription of Obituary published in the Primitive Methodist Magazine by T.G.

MR. EDWARD TEAL was one of the oldest officials of the Pickering Church. His health failed during the winter, and on May 18th, 1909, he entered into rest after seventy-eight years of the labour and sorrow that fall to the human lot. He was converted just after his marriage, and his gratitude to Primitive Methodism for the ministry which saved him during a perilous stage in life never waned. One of his latest, acts was to designate £5 as a gift to the Centenary Fund in recognition of this service.

For nearly fifty years he endured the hardness demanded of local preachers in the days of long journeys. For a long period he led one of the classes in the Pickering Society. His wife pre-deceased him by several years. He wished to be buried in the same vault, but with the rites of his own church, a wish denied him by the Anglican authorities on the ground of a clause illegally embodied in a deed of gift of the site for the enlarged churchyard.

Fellow local preachers carried him to his burial, after a memorial service in the chapel in which he had worshipped.

He married Mary Baker (1830-1901) in the summer of 1851 at Driffield, Yorkshire. Census returns identify five children.