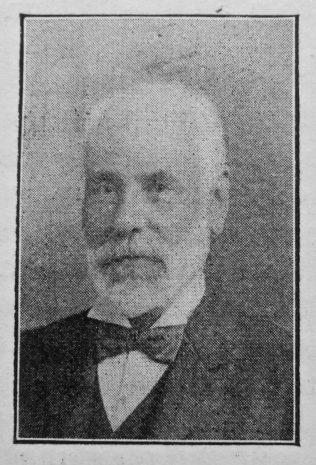 Transcription of Obituary in the Primitive Methodist Magazine by Alfred J. Campbell

The Shotley Bridge Circuit and especially the Shotley Bridge Society, has sustained a great and irreparable loss in the death of William Telford, who died in his seventy-second year, on May 5th, 1905, and was interred in the Benfieldside Cemetery on Tuesday, May 9th, in the presence of a very large and representative gathering. Rev. James Taylor, of Crook, conducted the funeral service assisted by Rev. T.P. Ellis (circuit minister).

Mr. Telford was a man of strongly marked individuality, and for his sound judgment, his wide outlook on things, his manly rectitude, his godly spirit and humane characteristics, he was early in life called to take up the burden of many and varied public interests.

The people loved and trusted him, and though retiring in disposition, he never shirked the call of public duty. For many years he was a member of the Benfieldside School Board and the old Local Board. He was also, up to the time of his death, a member of the Urban District Council, of which he was Chairman. He had a great deal to do with the inauguration and carrying through of the building of the new Primitive Methodist Church and School at Shotley Bridge, in 1895. He was one of the trustees and treasurer from the beginning. One marked feature of the man was his generosity to every cause that lacked assistance. No one will ever know on earth the help he gave to needy people and institutions, and especially to his own Church.

His relation to the Church was not in any sense official. For officialism as such he had little taste. His mission and ministry in the Church was human, his contributions were not merely and only financial, but spiritual. His presence in a meeting was enough. He carried an atmosphere about with him that calmed, and steadied, and inspired.

He was never demonstrative, his nature was not volcanic. There was nothing eruptive about him. He simply shone like a stedfast planet in the sky of church life, and his quiet light illumined and guided all it touched. He was in all things a “holy man of God who passed by us continually.” He was essentially charitable in his way of looking at men and things. If there was a good side to either an institution, or an idea, or a book, or a man, he would see it. He never approached anything from the side of finding fault.

His truly childlike spirit was manifest in the intense interest he had in children. They never wearied him. He could always see in them something that reminded him of the heaven from which the children’s Friend had come.

Although a busy man in office, and market, and Council Chamber, he had his spaces of quietude in which his spirit grew and mellowed as the years went on.

Among the many letters which his widow and family have received, one especially has touched the writer of this memoir, because it indicates the real secret and power of the man.

“He was a mystic,” says the writer, “and he was all other things because of this.” Among poets, Burns was his favourite, the humanity of the poet moved him. Among preachers, Dr. Parker was his ideal. He knew him as a boy. They belonged to the same town, he went with him and heard him preach his first sermon; and the rugged, strenuous thinker ever appealed to him right on to the day the great preacher ascended. It was not so much the logic of a sermon he looked for, or the accuracy of detail, but the lightthat came out of it and illumined him and gave him strength and peace. It was the spiritual light that glowed in the sermons of our Connexional editor (Rev. Henry Yooll) that made his preaching to Mr. Telford a source of inspiration and joy.

He loved nature with a strange and awesome wonder. He would drive across the hills to the moors when the red heather was in bloom, and leaving the horse and phaeton in charge of some companion, he would wander into the thick of the heather, and uncover his head and kneel in prayer, and coming back with radiant face, would simply say in answer to a query as to where he had been: “I have just been thanking God for permitting me to live in this beautiful world.”

His widow has lost one of God’s noblemen, his only son misses the guiding hand of a true-hearted father, his four daughters mourn the loss of one of God’s best gifts to womanhood. The Church and the community are poorer by one who never knew what selﬁshness was, and all of us wait on the threshold God’s good time for the joyous re-union in the great Homeland of Heaven.

William was baptised on 17 November 1833 at Chester le Street, Co. Durham. His parents were John, a paper maker, and Jane.

William married Mary Robson (abt1832-1908) in the spring of 1855 in the Durham Registration District. Census returns identify seven children.