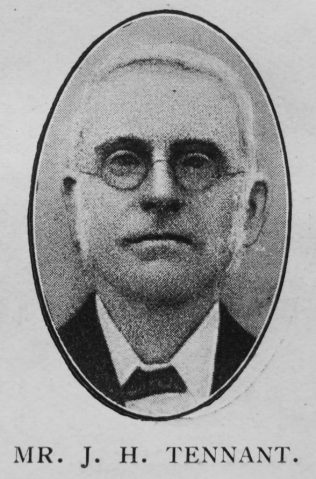 John H. Tennant, of Middleham, was translated to the higher service January 20th, 1909. He was born at Middleham, the eldest son of Thomas and Elizabeth Tennant, who were both staunch members of our Church; he surrendered himself to Christ in Smallbridge Chapel.

In 1874 he married Elizabeth, eldest daughter of the Rev. George Stout, who encouraged and helped him in every good work. He was a life-long abstainer and non-smoker; took a great interest in young men and did much to strengthen the ties which held them to the Church. A liberal supporter of the cause, and kindly disposed, he seldom failed to help when real need was brought under his notice. He was gentlemanly, courteous, a lucid preacher, very faithful to duty, had remarkable power in prayer, and his services were much appreciated by his own and other Churches.

Rev. John Bennett writes: “I have known him for 30 years and always found him a true man and sincere  Christian.” Rev. Irving Graham says: “In a district in which it is not the easiest thing to confess and stand up for Nonconformist principles, he was never backward in defending our position.” Rev. W.D. Cox states: “He preached the Word of God almost every Sunday with a rare effectiveness. He was naturally a leader of men.”

Bro. Tennant held the offices of Chapel Treasurer, Circuit Steward, Class Leader, and several times represented his Circuit at the District Meeting. He was also Parish Councillor, Secretary of the Moor Committee, and a manager of Birch Memorial School.

During his last illness his confidence never wavered, and he passed peacefully away to be with Christ.

His funeral was one of the largest seen in Middleham. Many gathered from all over the Dales to pay their last tribute of respect to one they loved. The memory of the just is blessed.

John was born in the spring of 1847 at Middleham, Yorkshire, to parents Thomas Tennant, a master mason (1851), and Elizabeth Handley.