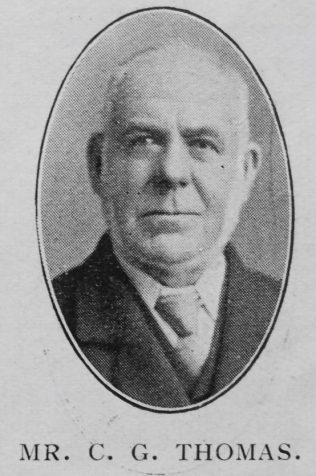 Charles George Thomas was born at Newport, Mon., in 1838. When about 25 years of age, and soon after his marriage, he consecrated himself to the Lord, and attended public worship at Quakers’ Yard, where the services were conducted in English and Welsh.  Preferring the English language, he and eleven others decided to take a cottage; but this proving unsatisfactory, they secured ground and built a Primitive Methodist Chapel. Mr. Thomas became class leader, and began to preach, and continued as a local preacher 44 years.

He removed to Penrhiwceiber 38 years ago, and worked at the colliery until 1906, when he retired and received a present for long and faithful service. He was the most active member of our Penrhiwceiber Church. He was honourable, faithful, guileless, reliable, generous, and wholehearted. He loved his Lord and his Church, and had a tender affection for children. At the time of his death he was chapel steward, treasurer, Sunday School teacher, class leader, local preacher, and treasurer of the Free Church Council. He was a total abstainer 34 years. The Merthyr Express says: “The loss sustained by the Church can only be realised to its full extent by those to whom he rendered so many various services. He won the admiration and respect of his co-workmen, tradespeople, and the inhabitants at large by his pious living. Deceased was always cheerful and ready to give a helping hand to others who needed it.”

This record is true. Death had no terrors for him. He was remarkably calm and confident. The Vicar said he never knew a case like it. He died 23rd June, aged 72 years. His funeral was largely attended. Rev. B. Beckerlegge, who conducted the service, was assisted by Bros. W.G. and N. Bowles and Councillor T. Jones (Baptist). A memorial service was held in “Hope” Chapel, 24th July, by the writer.

Charles was born in 1838 at Newport, Monmouthshire, to parents John, a mariner, and Sarah. He was baptised on 6 May 1838 at St. Woolos, Newport.

He married Elizabeth Harry (b abt1839) on 16 February 1862 at Roath, Glamorganshire. Census returns identify six children.